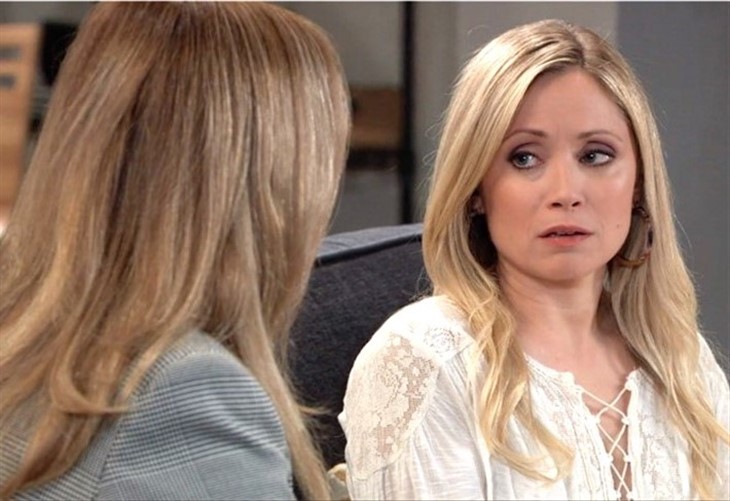 ABC General Hospital (GH) spoilers tease that Laura Collins (Genie Francis), mayor of Port Charles, is about to finally make her return to Port Charles. But as one returns, another Spencer is set to leave. As viewers know, Laura’s daughter Lulu Falconeri (Emme Rylan), is on her way out of town. But how will Lulu exit Port Charles?

It would be the worst possible scenario for Laura to face. That is if somehow Lulu dies. Lulu has chosen a very dangerous profession, that of a journalist. And her current story is to focus on drug lord Cyrus Renault (Jeff Kober). Sickened at the prospect of Cyrus and his drugs overrunning the city, Lulu has made it her mission to bring him down.

She even brought in Jackie Templeton (Kim Delaney) to give her story that much more credence. Cyrus likely wouldn’t think twice about eliminating Lulu, especially if he perceives her as a potential threat. Laura thought her son, Nikolas Cassadine (Marcus Coloma) was dead for several years and it took a toll on her. If Lulu died, it will devastate Laura as well as the rest of her family. But perhaps a happier exit is coming for Lulu.

Another possibility is that Lulu will decide to leave Port Charles once and for all. With Cyrus seemingly invincible, and the return of her ex-husband, Dante Falconeri (Dominic Zomprogna) perhaps Lulu will decide to get away from all the drama. She may even ask her current flame, Dustin Phillips (Mark Lawson) to accompany her. Lulu and Dustin have gotten even closer, with Lulu even asking Dustin to move in with her. Dustin has no real ties in town, other than his teaching job, so he might be willing to just pick up and move. But with Dante newly returned to town, would she take her kids away from their father just like that?

But ever since Dante returned to town, Lulu has been confused about her feeling for Dustin and Dante. Although Dante is still under the control of the brainwashing, he has come to town for what he believes is a WSB mission to apprehend Peter August (Wes Ramsey).

But the mission is bogus, set up by Dr. Leisl O’Brecht (Kathleen Gati) to prove herself innocent of the crimes that Peter committed. It’s possible Dante will discover that it was all a setup and return to have more treatment. But maybe this time he will ask Lulu and the kids to go back with him. Although Lulu is fond of Dustin, it would seem the most likely scenario for Lulu’s upcoming exit!

General Hospital Comings and Goings: Jophielle Love Back On Set, Could Rebecca Budig Be Close Behind? #GH #GeneralHospital https://t.co/6kM5H2sSQ7

Will Lulu die at the hands of Cyrus? Or will she leave town with new flame Dustin? Or will Dante and Lulu leave town together? Will Laura make it back to Port Charles just in time to say goodbye to her only daughter? Exciting times are coming up in Port Charles, so stay tuned to General Hospital airs weekdays on ABC. And don’t forget to check right back here regularly for all your General Hospital news, information and spoilers.