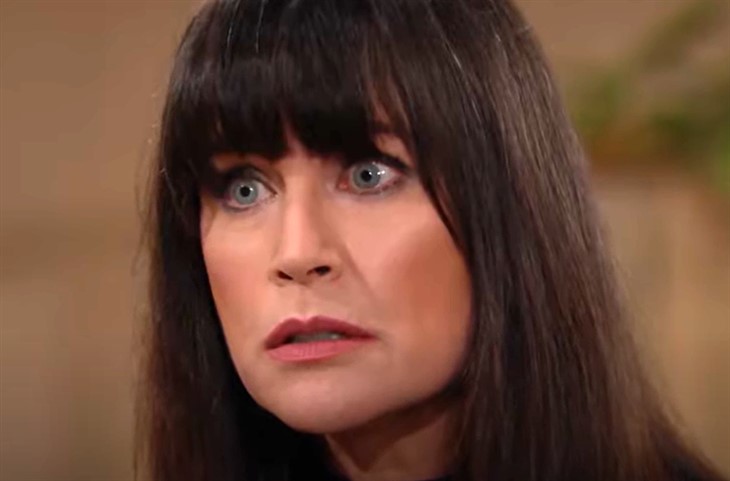 CBS The Bold and the Beautiful spoilers document that in Los Angeles, Quinn Fuller Forrester (Rena Sofer) isn’t right about what she sees. However, what might be developing could bear out Quinn’s instinct over time.

Eric Forrester (John McCook) took pity on Shauna Fulton (Denise Richards). He determined that Quinn manipulated her friend into doing her bidding. While it’s true that Shauna went along with Quinn’s Bridge scheme and the Shidge wedding, the feelings she developed and maintains for Ridge Forrester (Thorsten Kaye) clouded her judgment.

However, Shauna isn’t after Eric, as Quinn impulsed into believing.

The Bold And The Beautiful Spoilers – Stunned By Staircase Walk

Shauna descended the staircase in the mansion that Quinn considers to be her home. But, as Eric told his estranged wife, Quinn shouldn’t expect to return at any point in the near future.

The above means that Eric is more than disappointed, he’s angry. McCook’s character actually used the word angry when telling Quinn that he hasn’t been able to get past the latest selfish and destructive stunt she’s pulled.

Quinn continues to refuse to take majority ownership of all that happened. She sees herself as trying to have helped both Shauna and Ridge, which clearly wasn’t her only or even main intent.

Shauna knows that Quinn’s main intent was to push Brooke Logan Forrester (Katherine Kelly Lang) out of the Forrester family. Yes, Quinn did want to pair Shauna with Ridge because she felt her longtime friend, from Las Vegas, Nevada, was best suited to Kaye’s character.

Eric told Quinn that wasn’t her choice to decide what was best for other people’s lives. As B&B fans recall, Shauna also told Quinn, though in a mild way on a few occasions, that she understood Brooke was a target. Shauna also felt that Brooke wasn’t right for Ridge and acted on her own accord.

Quinn’s ferocity with Shauna was misguided because she’s actually been trying to convince Eric that his wife’s intentions weren’t sinister. Quinn slapped Shauna’s relay of that information away because she’s currently on the outside looking in at the mansion.

The Bold And The Beautiful Spoilers: Thomas Has Schizophrenia, Will B&B Make Stigma Better Or Worse? #bb #boldandbeautiful https://t.co/vPpcndQ9Wc

It would seem more plausible that B&B’s placement of Donna Logan (Jenifer Gareis) outside of Forrester Creations’ main office winks at a greater potential. They were married in the past and still have chemistry. This is an option that Quinn’s sure to become aware of as she tries to reclaim what was a great life.