The Bold And The Beautiful Spoilers: Eric Treats Shauna Like a Queen – Punishes Quinn On Purpose 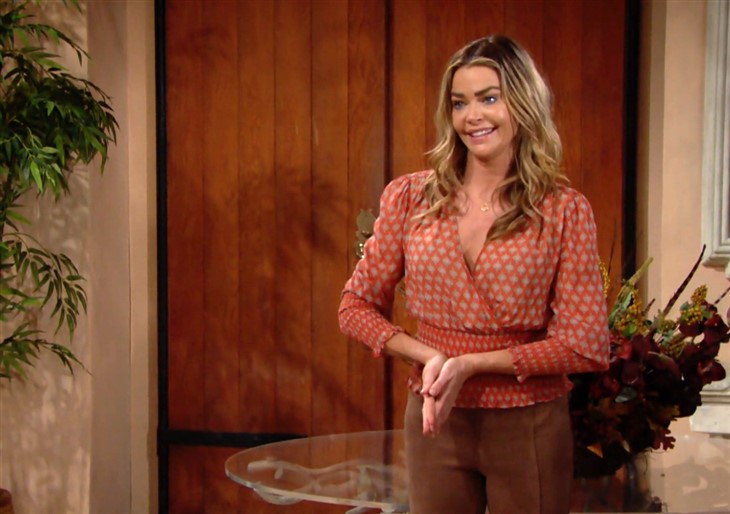 CBS The Bold and the Beautiful spoilers document that in Los Angeles, Shauna Fulton (Denise Richards) intended to leave the Forrester mansion. She just finished a strained conversation with her best friend, Quinn Fuller Forrester (Rena Sofer). In it, Quinn told Shauna to get out of what she considered to be her home and away from her husband.

Because Shauna appears to be considerate, she followed Quinn’s advice and told Eric that she appreciated him allowing her to recently stay in his guest house. But Shauna also told Eric Forrester (John McCook) that she would be leaving and then later arrived with her packed bag in hand.

Eric was having none of it. He told Shauna that he recognized the role she played in the Bridge break and the very brief Shidge marriage.

However, McCook’s distraught character also complimented Shauna on her kind-hearted nature and told her that she would be staying with him. He held her suitcase in his hand and Shauna didn’t offer a counter.

As of now, Eric isn’t romantically interested in Shauna. Richards’ character just told Quinn that she’s still in love with Ridge Forrester (Thorsten Kaye). So, her feelings haven’t shifted either.

A sharp closing shot had Shauna eying Quinn’s infamous oil-based portrait. The look within her eyes was fully subjective. But the upturn of her lips, confirming satisfaction, indicates that she recognizes the potential of what’s developing.

Shauna sees what’s happening. She’s already made her best pitch to Eric about Quinn. But he’s not interested in a current reconciliation and may be nearing a decision that ends Queric entirely.

Quinn didn’t expect Shauna to be living at the mansion, even if it’s just at the guest house. But after that reveal happened, Quinn instantly realized what might happen.

Queric can survive if Shauna moves out and Quinn moves back in. But that hope appears to have been dashed and with it, Quinn’s lush life might already be over.

Eric has determined that Quinn was unable to control her supposedly banished negative impulses. He feels that he can no longer trust his wife, who may soon lose the marriage that’s meant the world to her.