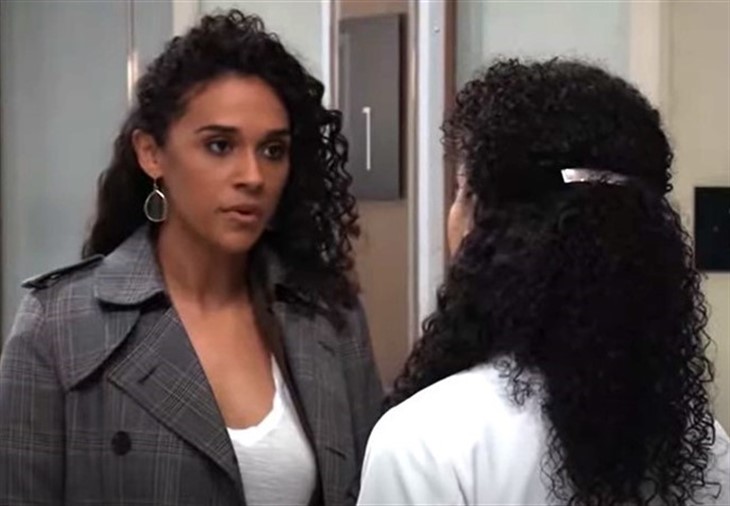 ABC General Hospital (GH) spoilers tease that even as Cyrus Renault (Jeff Kober) is gathering his forces, two of Port Charles’ leading citizens have found common ground in an effort to bring Cyrus to justice. As viewers know, Cyrus has hired Brando Corbin (Johnny Waycor) as his new driver.

Of course, Brando is working undercover for Sonny Corinthos (Maurice Bernard) but that’s a story for another time. In addition, Julian Jerome (William DeVry) has thrown his lot in with Cyrus. Finally, Cyrus seems to have Sasha Gilmore (Sofia Mattsson) right where he wants her as she deals with her addiction to the drugs Cyrus is peddling.

Jordan admitted to being under Cyrus’ thumb in order to protect her son, TJ Ashford (Tajh Bellow) from Cyrus and his men. As she told Portia the story, Portia decided to offer Jordan her help. Jordan left out the part of the story about Marcus Taggert’s (Real Andrews) faked death, but for now, Portia is ready to help Jordan any way that she can. But what will they do?

Not long after Portia and Jordan put their heads together, Jordan summoned Cyrus to meet her at the hospital. After a brief argument, Jordan seemingly passed out and fell to the ground. But is something really wrong with Jordan or did she and Portia set the whole thing up as part of a newly formed plan? Jordan has had plenty of medical issues in the last couple years. After being hit by a car, Jordan found herself needing a kidney. She almost died until Ryan Chamberlain (Jon Lindstrom) unwittingly donated a kidney to save Jordan’s life?

Could Jordan’s kidney be failing? Or is this all a fakeout by Portia and Jordan to keep Cyrus from using Jordan any further? It seems unlikely that Jordan will fake her own death, just because she has already played that card with Taggert? But if Jordan is dealing with her own medical issues, then perhaps Cyrus will back off long enough for Jordan to get some real evidence against Taggert. She may even fake having to be on dialysis in order to stay out of Cyrus’ reach.

Did Jordan really pass out? Is the kidney she got from Ryan failing? Or have Portia and Jordan come up with a plan to distract Cyrus? Exciting times are coming to Port Charles, so stay tuned to General Hospital airing weekdays on ABC. And don’t forget to check back here regularly for all your General Hospital news, information and spoilers!