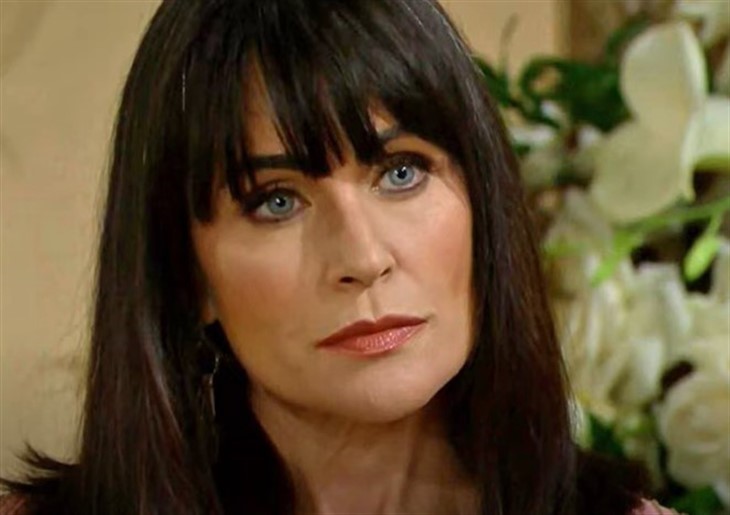 The Bold and the Beautiful spoilers document that Quinn Fuller Forrester (Rena Sofer) continues to sabotage herself. Barely any time has passed since she self-revealed her total duplicity.

Eric Forrester (John McCook) was flabbergasted that his wife totally betrayed him. But she also defied his often stated wishes that she back off Brooke Logan Forrester (Katherine Kelly Lang).

Now, Quinn is taking aim at Shauna Fulton (Denise Richards). That’s creating another problem, as Eric has taken a stand in her favor.

The Bold And The Beautiful Spoilers – Shauna Fulton Turns Into Frenemy

Shauna was good friends with Quinn since the time their children were in school. B&B viewers were introduced to Richards’ character in the recent past, as she deepened Flo Fulton’s (Katrina Bowden) backstory.

All went well, initially. Flo learned that she was a member of the Logan family and the ladies were welcomed into that clan. But the Beth Spencer (Madeline Valdez and River Davidson) arc damaged them, with Shauna then becoming one of Brooke’s enemies.

To see Shauna and Quinn turn on each other will surely draw Brooke’s interest. Her legendary instincts will be proven right once again.

The Bold And The Beautiful Spoilers: Eric Treats Shauna Like a Queen – Punishes Quinn On Purpose

Bold And The Beautiful Spoilers – Eric Forrester Wants To Move On

Eric defended Quinn for years. His family has withheld its approval of her, refusing to accept that she had ever truly changed.

A general period of tranquility existed after Quinn and Ridge (Thorsten Kaye) kissed. Hardcore viewers were also impressed that she actually beat the infamous Sheila Carter (Kimberlin Brown). That legendary villain was forced to leave the Forrester mansion, not having reclaimed Eric’s heart.

There is a lesson to be learned from the Sheila return arc that played out in the latter part of the last decade. Eric does offer immense to others. But that doesn’t mean he’s destined to develop feelings for Shauna. Basically, he’s in the early stages of moving on from Quinn.

Quinn has no intention of returning to the desert, where Brooke told Eric she should go after he divorces her. Brooke’s demand made months ago, took on added weight in recent days.

The Bold and The Beautiful News Update: Denise Richards Films A New Series With A Special Lady #BB #BoldandBeautiful https://t.co/lNr2iT0RlL

Eric realizes that he should have listened to Brooke and is also openly questioning his own judgment about whether Queric should continue to exist. He does love Quinn and knows she cares for him. But trust is gone, Shauna is staying on the property, and his wife might soon become another ex.