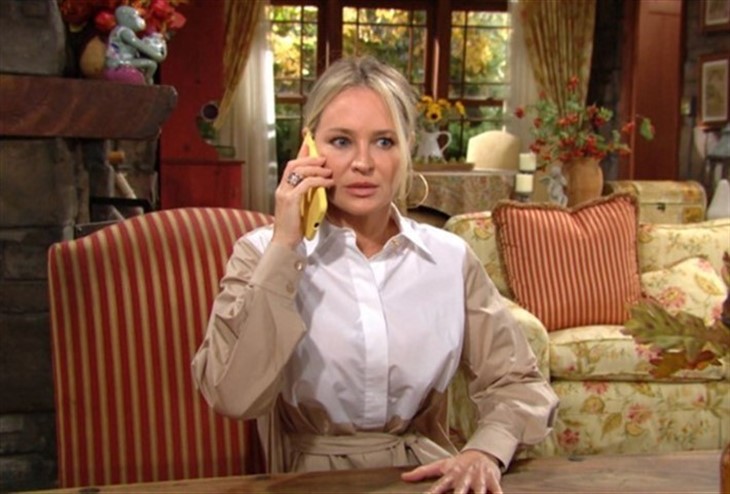 CBS The Young and the Restless spoilers document that in Genoa City, Wisconsin. Sharon Newman (Sharon Case)appears to have beaten cancer. Unless Y&R decides to revisit what seems to be a happy ending to that serious storyline, then some other form of drama can impact Sharon’s life in the near future.

Sharon has set her wedding date with Rey Rosales (Jordi Vilasuso). His offer to get married quickly, meaning on Halloween, was turned down. Instead, Sharon suggested New Year’s Eve, which Rey okayed.

The now two-month time frame allows plenty of plot space for almost anything to derail Shey. Family issues, involving whatever Faith Newman (Alyvia Alyn Lind) is doing with her new acquaintance, Jordan (no last name known for this character, as played by Madison Thompson), or Adam Newman’s (Mark Grossman) romantic free agency could delay, or dash Sharon’s hopes to marry.

Faith has always been wise beyond her years. But she’s just started walking down a path that reminds hardcore fans about Cassie Newman (Camryn Grimes).

Grimes’ initial character was written from a sweet young lady into a rambunctious teenager who was wild for Daniel Romalotti (Michael Graziadei). That infatuation eventually led to Cassie’s death, due to the injuries she suffered while attempting to drive the drunken Daniel home following a party.

It would seem hard to believe that Y&R would ever pursue an arc that led to Lind’s elimination from the cast in such a similarly horrid manner. But Faith could quickly become a problem, which causes Sharon’s focus to shift from marriage to overwhelming parental concern.

The Young And The Restless News Updates: You Can Count On Joshua Morrow To Stir Up Trouble

Adam claims to have had an epiphany in recent months. He’s come to realize that Sharon, not Chelsea Lawson (Melissa Claire Egan), is his greatest love.

Y&R’s writing staff had Sharon respond to Adam, telling him that she wouldn’t ever love anyone the way she loved him. There was enough subjectivity in that response to allow Shick fans to continue believing that Nick Newman (Joshua Morrow) retains his own, special place in Sharon’s heart.

As far as Adam, he’s lost, Chelsea. So, he’ll continue to consider the Sharon option until she actually completes her vows with Rey.

The Young And The Restless Spoilers – Other Soapy Alternatives Exist

Rey works in a dangerous profession. He puts his life on the line with regularity. So, it’s reasonable to believe that Vilasuso’s character could face a life-affecting moment that creates a marriage ceremony delay.

The Young And The Restless Spoilers: How Sally Spectra Ended Up In Genoa City, According To Courtney Hope #yr #youngandrestless https://t.co/LFMgKdpzLw

Noah Newman (Robert Adamson) was heading to California the last time viewers saw him. Mariah Copeland (Grimes) lives in Genoa City, Wisconsin. Assuming Noah returns for the wedding, he could catch Rey doing something that Sharon must be told. And if Noah isn’t around, then Mariah could serve as the intel source that stops Shey before it legally starts.