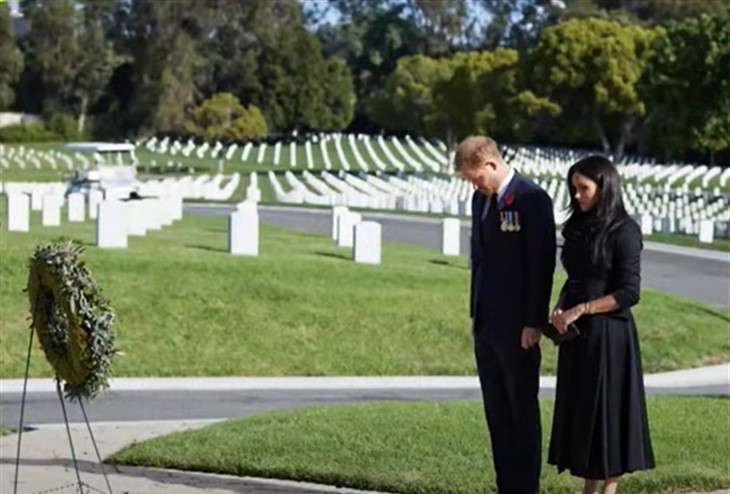 British royal family news reveals that even when Prince Harry tries to show himself to be the better man, he fails horribly. His latest attempt to make up for his shameful decision to throw away his family and snub his country has him looking like a $14 million dollar Hollywood fool.

The man who bragged about willfully leaving behind the country that once loved him for, “financial freedom,” in America had the chickens come home to roost today and he took his comeuppance not like a man but like a boy who refuses to learn his lesson.

Will Prince Harry Ever Learn That One Cannot Eat His Cake And Have It Too?

Today the country and his royal family observed the annual Remembrance Day event for fallen soldiers as they do every year. It is a solemn and dignified event that includes a moment of silence and the laying of wreaths to honor war heroes.

Apparently, Harry has not read the memo that he is no longer a member of The Firm and certainly, in the opinion of a ranking military leader who does not want him representing the troops, a war hero. Yes, he served ten years in the military but that was then and this is now.

Despite this public rebuke, Harry asked that a wreath be laid at the Cenotaph on his behalf today since he could not bother to be there himself. An absentee leader is like an absentee parent—not a good idea for anyone involved.

It is reported that the Fresh Prince of Montecito made his request to Buckingham Palace. In light of his Megxit grandstanding and departure from royal duties, i.e. work, in March, the request was naturally declined. That Harry can’t get it through his head that he is no longer a working royal is a shame because the longer he prolongs the agony the worse the pain will be when the band-aid is ripped off.

After being told that his request was denied, he was said to be, “deeply saddened,” the Times reported.

So what did Harry do? What he does so well. Harry and Meghan held an ostentatious photo op of themselves at the Los Angeles National cemetery.

There they, “personally recognized,” Remembrance Day in their own uniquely passive-aggressive, tone-deaf way with their face masks coming off once the cameras started clicking. Numerous pictures show them traipsing among the graves, she dressed in all black, he wearing his military medals, all three of them.

The photo op was marred somewhat by the fact that Meghan’s sky-high stilettos were swallowed up by the lush green grass and darn if her long hair didn’t obscure the red poppy on her dress.

But they did remember to bring flowers, reportedly plucked fresh by Meghan from the grounds of their $14 million Montecito mansion.

Did Meghan Markle And Prince Harry Pay Their Respects To Fallen Commonwealth Soldiers?

And when it came to the placing of those flowers, the Duke and Duchess of Sussex pointedly chose two graves not on the continent: one for soldiers in the Royal Australian Air Force and one for those who served in the Royal Canadian Artillery.

Be sure to catch up on everything happening with the royal family. Come back here often for royal family spoilers, news, and updates