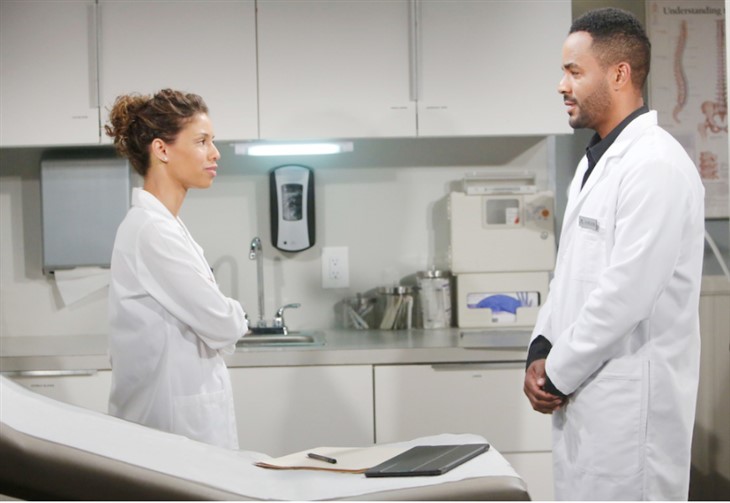 CBS The Young and the Restless spoilers document that in Genoa City, Wisconsin Elena Dawson (Brytni Sarpy) will prevent Nate Hastings (Sean Dominic) from leaving town. She’ll admit what Devon Hamilton (Bryton James), various others, and viewers have suspected. She has developed feelings for Nate.

Love isn’t a fully logical issue. Just as the practice of medicine involves subjective human takes and science, so too is a romance about internal chemistry and emotion.

Clearly, Elena and Nate feel more than attracted to each other. The bond that working at the hospital and then, the New Hope clinic created normally would have resulted in a solid friendship. But a series of converging circumstances sparked something more.

Nate was noticeably drawn to Elena long before she first mentioned that he was attractive. Devoted viewers recall that happened during the Escape Club day when Elena and Amanda Sinclair (Mishael Morgan) had a heart to heart. However, that brief tell didn’t imply to Amanda that something dramatic was about to change lives.

Y&R Spoilers – Nate Hastings Was Alone For Too Long

Y&R hasn’t filled in many of Nate’s backstory details. The character was off-screen for a number of years but returned in the recast of Brooks Darnell (Nate) in 2018. A subsequent recast allowed Dominic to join the cast.

Darnell’s edition of the character spoke about his deceased girlfriend, Carolyn (no last name for this character, who was never seen on screen and no action was ever cast). Her death was a leading reason why Nate was open to returning to Genoa City, Wisconsin, where he initially became the Newman family’s concierge doctor.

Dominic’s version of Nate has spoken about Carolyn on a few occasions but hasn’t offered much detail. So, this part of his backstory can be mined as part of the apparent development of the Nelena coupling storyline, if the writing staff believes it needs to do so.

Elena isn’t being asked by Devon to turn off her feelings. But Devon is giving the woman that he still loves no choice in the matter. His reaction to her decision to be with Nate effectively ends what was a couple to root for.

It will take time. But Nate stands as a compelling reason for Elena to move on with her life. He will offer her the support she needs and it seems likely that she’ll accept it.