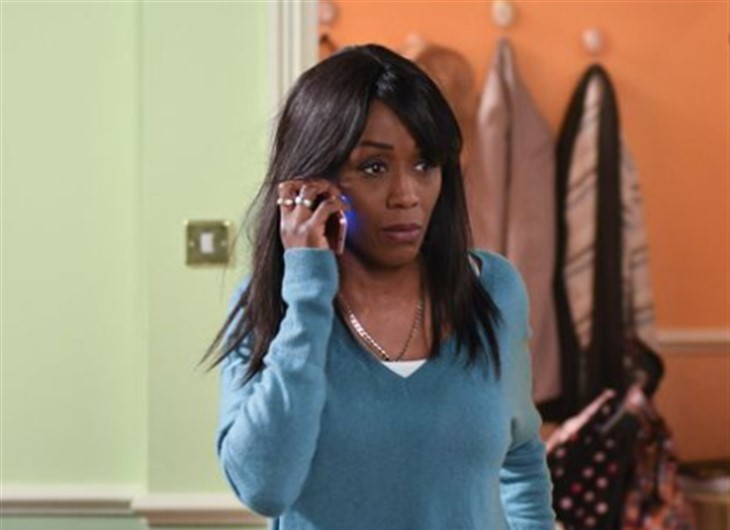 Eastenders spoilers for Monday reveal that Denise will tell her son the truth… that she is his biological mother. Meanwhile, Kat Slater (Jessie Wallace) is having doubts about the robbery. She calls it off, but Ben Mitchell (Max Bowden) convinces her to stick with the plan.

Later, she announces that Kush Kazemi (Davood Ghadami) will be her driver, which doesn’t impress the Mitchells. Also, Suki has plans for the Slater home. The sinister matriarch plans to turn the house into studio flats. She masterminds a sneaky scheme in order to make it happen.

On Tuesday, Kathy Beale (Gillian Taylforthe) tells Ian that his first payment is due. Suki notices Ian’s desperation and makes a proposition that will help them both. Meanwhile, Tina hopes to stay with Kathy. However, she says that her problems with Ian make that impossible. Elsewhere, Max helps Linda with a business idea and proposes expanding the age limit on the Lucy Beale grant.

Eastenders spoilers for Thursday reveal that Kim Fox (Tameka Empson) is surprised to find Denise caring for her son. She tells her sister to get back together with Jack Branning (Scott Maslen). Shirley Carter (Linda Henry) asks Gray Atkins (Toby-Alexander Smith) to let Tina move in temporarily, as she is now homeless.

On Friday’s episode, Sharon Watts (Letitia Dean) warns Linda about Max, but she insists that they are just friends. He will continue helping Linda with her business idea and sparks fly between them. She keeps Sharon’s warning in mind, but could she be swept away by the moment and end up paying the price?Later, Linda gets paranoid about Ruby Allen (Louisa Lytton) spying on her. She snaps at Ruby, who fires back with some snarky comments. Annoyed and angry, Linda steals a bottle of liquor from the club.

#Eastenders Spoilers: Mick Abused All Over Again, Katy Gaslights Him Into Silence https://t.co/772YgCcnd7

Ian insults the previous owners of The Vic during an interview with The Walford Gazette. Tina is fuming as she hears what he is saying about Mick and Linda. Plus, Iqra makes a shocking discovery.

Be sure to catch up on everything happening with the soap right now. Come back here often for Eastenders spoilers, news,, and updates.