The Bold and the Beautiful Spoilers: Eric At Crossroads – Will Love For Quinn Be Enough To Give Her Another Change? 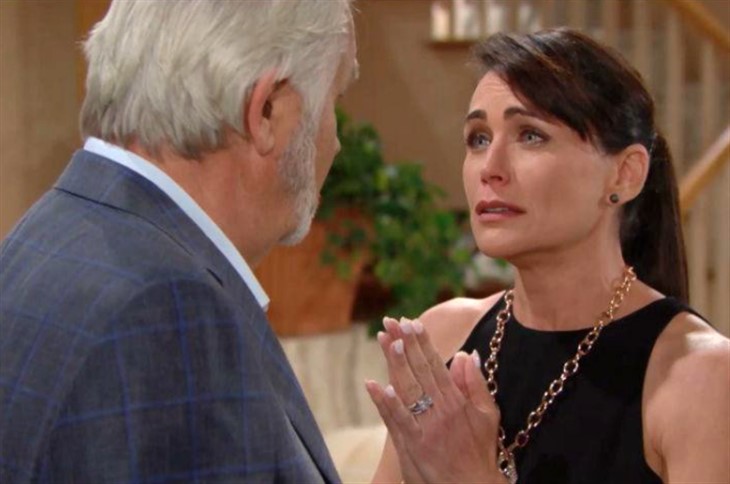 The Bold and the Beautiful spoilers document that in Los Angeles Eric Forrester (John McCook) continues to look fondly at his current wife’s oil-based portrait that hangs above the mantle in his mansion. But when Eric thinks about positive moments in the past is he starting to confine Quinn Fuller Forrester (Rena Sofer) to that time frame?

There’s no doubt that Quinn has meant a lot to Eric through the years. He’s said that he doesn’t know what his life would be without her. But Eric also told Wyatt Spencer (Darin Brooks) that he’s given Quinn many chances and doesn’t know if he has the energy left to give more.

The Bold And The Beautiful Spoilers – Leaving The Gate Ajar

Wyatt was buzzed through the gates by Eric. Just as Wyatt had to ask permission to see McCook’s character, so too does Quinn at the moment.

She told Flo Fulton (Katrina Bowden) that all was not over. Quinn has no plans to give up. She intends to reclaim her life with Eric. In fact, Sofer’s character appears to believe that all she needs is time and all will be resolved somehow.

The Bold And The Beautiful: Which B&B Couple Has Their Proposal Interrupted? Vote Now! #bb #boldandbeautifulhttps://t.co/yTUkhjs094

Wyatt also wants Quinn out of his beach house, as she’s crimping the style he realized earlier this year when Flo moved in. While there have been no issues, Wyatt doesn’t want his mother to become permanently involved in his day-to-day personal life.

So, pushing Queric’s reconciliation makes sense. Yes, Wyatt loves his mom and truly believes that she belongs to Eric. But Brooks’ character also wants his life restored to what it recently was.

Quinn wants to be back in what she considers to be her home. Eric is her husband and she’s not about to let him make any final decisions on his own.

Queric represents the proudest achievement in Quinn’s life, after having Wyatt. Yes, the jewelry business is good, but that hardly matches what her husband and son mean to her.

The current battle for Eric could involve outmaneuvering Shauna, who may, or may not be ingratiating herself into his life while living in the mansion’s guest house at his insistence.