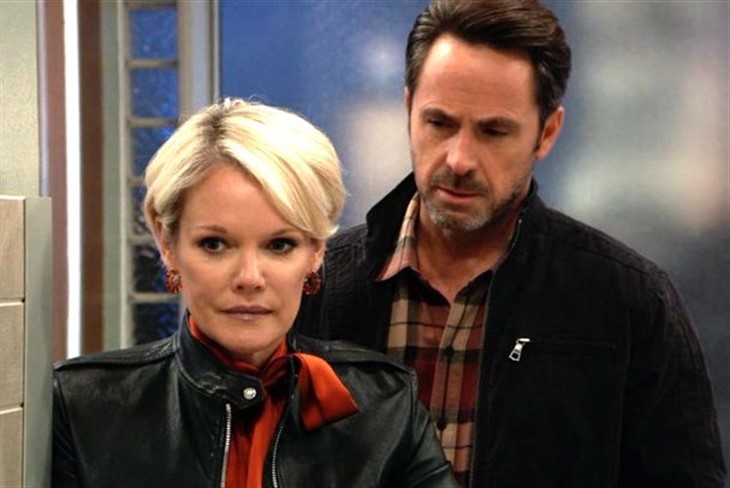 General Hospital spoilers and updates reveal in Port Charles, NY Ava Cassadine (Maura West) is becoming fed up with Julian Jerome’s (William deVry) demands, will Ava stop her once and for all?

General Hospital’s Ava came to Port Charles under her brother’s orders years ago. Ava was the one who procured Derrick Wells Media and had everything ready when Julian came to town with his new face. Ava knew that Sonny Corinthos (Maurice Benard) and Julian were bitter enemies and she had to keep his identity a secret. Ava killed Sonny’s girlfriend, Connie Falconeri (Kelly Sullivan) to keep the truth from coming out.

Ava has helped Julian through several scrapes through the years, many more than he has her. Julian recently demanded Ava get a divorce to appease the man who killed her daughter to save his life. Ava has gone to Sonny and tried to help Julian and asked one thing in return. Ava doesn’t want Julian to expose Marcus Taggert (Real Andrews) to Cyrus Renault (Jeff Kober). Ava wants to protect Trina Robinson (Sydney Mikayla) and will do so at any cost.

General Hospital Spoilers: 3 Reasons Why Carly Might Be In Over Her Head

General Hospital’s Julian is trying to spin things to his advantage. Julian isn’t convinced that Sonny won’t take him out the first chance he gets and Cyrus has offered him protection. However, Cyrus always has a price for his protection. Julian knows that exposing Taggert would be huge in Cyrus’ eyes and could certainly put Julian in Cyrus’ good graces.

However, exposing Taggert would put a bigger bullseye on Julian since Sonny has warned him not to put Taggert in harm’s way. Exposing Taggert would directly place Trina in danger and she is under Sonny’s protection. Perhaps Julian believes Cyrus could protect him from Sonny but is someone else a threat to Julian if Trina is placed in danger? Will Julian be facing an enemy he doesn’t know exists until now?

General Hospital’s Ava loves Trina and has demanded that Julian not expose her father because Trina would get hurt. Cyrus has already attacked Trina once and put her in the middle of a gunfight in a warehouse. Jason Morgan (Steve Burton) and Curtis Ashford (Donnell Turner) were the only reasons Trina and her date, Cameron Webber (William Lipton) survived.

Ava knows if Cyrus gets his hands on Trina again the girl is as good as dead. How far will Ava go to save the young girl? Ava could realize that Julian is about to expose Taggert and decide that her young friend is much more important than her brother who is a marked man anyway. Could Ava shoot her brother to protect a child?

Ava knows what she wants out of life and Julian is already threatening her happiness. Is it time for Ava to take out her brother once and for all? Can Ava stop Julian before Cyrus gets his hands on her young friend?