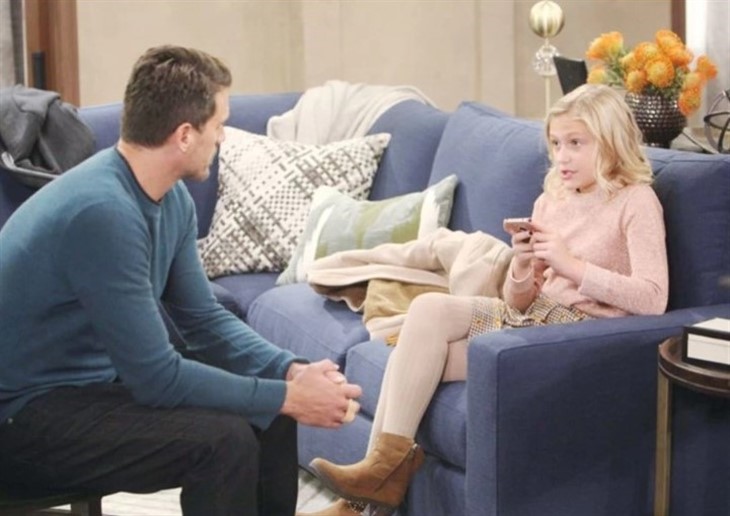 CBS The Young and the Restless spoilers reveal that in Genoa City, Wisconsin Faith Newman (Alyvia Alyn Lind) is about to take her adolescent rebellion a step further and it could spell doom for her dad Nick Newman’s (Joshua Morrow) relationship with Phyllis Newman (Michelle Stafford). Genoa City spoilers disclose that Faith turns to vodka for relief from her peers’ bullying!

Of course, Faith has been up to shenanigans for a while but her oblivious parents think that her hanging out with an older girl from school is keeping her out of trouble—just the opposite! What does her dad think when he finds his little girl hungover?

The Young And The Restless Spoiler Insights

Joshua Morrow spoke to Soap Opera Digest about this sensitive and controversial storyline saying of Nick, “he’s pissed,” when he discovers that Phyllis knew about Faith drinking and didn’t tell him. First off, Phyllis finds Faith in Chancellor Park and notices something is off with her but Faith begs her not to say anything. But then Nick shows up and he learns that Faith was drinking.

According to Morrow, “Faith is not going to pull one over,” on Nick. But viewers know that Faith has been conning him for days, so Morrow may be giving his character the benefit of the doubt!

How Will Nick Newman Handle His Latest Crisis?

He told the mag that Nick wants to be understanding and he will, “make sure this doesn’t happen again.”

It should be interesting to see how that happens and if mom Sharon Newman (Sharon Case) is told about her daughter’s drinking. Sharon and Nick have already lost one daughter, Cassie, to an alcohol-related death.

What is next for Faith Newman in Genoa City?

Could Faith’s crisis bring the ex’s back together? Maybe. Explosive show spoilers reveal that Nick will have a hard time getting over Phyllis’s reaction to Faith’s boozy binge. This could rock their relationship, which honestly seems to be based on sex alone. If that happens, Sharon has always been Nick’s go-to girl and with their daughter involved in their latest woes, it would be natural for them to hook up as they have done a thousand times before.

Will Nick rebound with Sharon if Faith continues to go down the wrong path? Sharon is about to marry Rey Rosales (Jordi Vilasuso) but anything is possible in Genoa City!