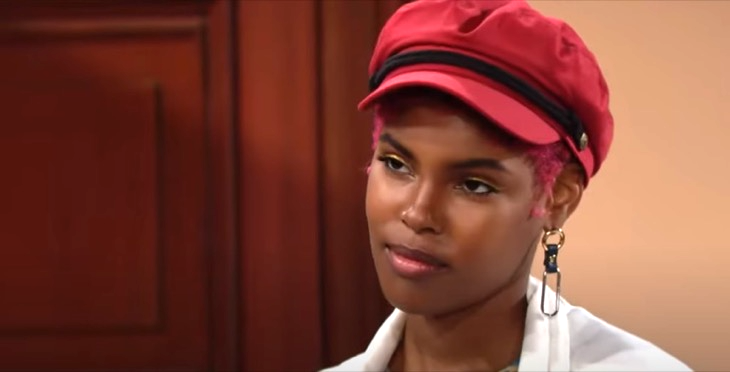 CBS The Bold and the Beautiful spoilers tease that there is a new face on the daytime landscape and that is Diamond White who is portraying Paris Buckingham, the sister of Zoe Buckingham (Kiara Barnes) on the Los Angeles based soap.

You may have already seen the daytime newbie in primetime as Lala on Empire. On Empire Lala were a huge online star and a talented singer. Diamond recently talked to Soap Opera Digest about that role and we have the details for you right here.

The Bold And The Beautiful Spoilers – Diamond White Has Arrived in L.A. From Her Role As Lala On Empire

Diamond dished about how the character she portrayed was a nervous wreck but eventually turned into a bona fide diva. “She started off very vulnerable … not really looking anyone in the eyes.”

And that is definitely a 180-degree turn from her B&B character Paris!

The Bold and The Beautiful Spoilers: 3 Reasons Why We Are Totally Loving Paris Buckingham

B&B Spoilers – Diamond White Has Been On Primetime And Daytime

Paris has come on like gangbusters after reuniting with her sister in Los Angeles. If Paris has a dark side or a sinister agenda we haven’t seen it yet. So far she has been sweet as pie and is a social worker to boot! Or is she? That is the tale she is spinning but don’t be surprised if her tale turns out to be a fib!

If Paris seems too good to be true, it’s likely she will soon show her true colors.

According to Diamond, “Paris is a person who is very carefree,” while she herself is anxious when meeting new people so she really had to dig deep to bring Paris to life. All in all, Diamond says that portraying Paris, “is an exciting change of pace for me.”

The Bold And The Beautiful Spoilers – What Is Next For Paris Buckingham in L.A.?

It will be interesting to see how Paris evolves over time. Right now she is smitten with Zende Forrester (Delon deMetz) who is smitten with her sister Zoe. At the same time, Carter Walton (Victor Saint-Lawrence) is smitten with Zoe also, while Zoe has eyes for both guys. We sense a scintillating storm of love and angst brewing here!

When we left these four young and restless peeps, Carter was down on one knee about to propose to Zoe who has been burned in love before. How will things shake out between these four now intertwined characters?

The Bold And The Beautiful (B&B) Spoilers: Liam Pushes ‘Thrope’ Before Release,…