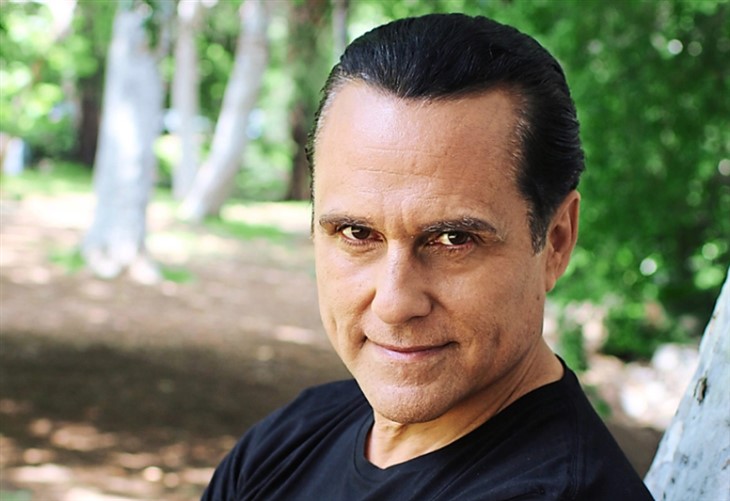 ABC General Hospital spoilers tease that Los Angeles soap star Maurice Benard (Sonny Corinthos) is getting a head start on Throwback Thursday by posting an old photo of himself and Steve Burton (Jason Morgan) on Tuesday, November 16. What gives? No reason, just a fantastic peek back in time for GH fans!

The picture is a close up of Burton and Benard who is holding his beautiful cherub of a daughter. Both men look fantastic, happy, and healthy and obviously were having a fun-filled day.

Maurice captured the beautiful photo: “This is about the time Steve was following me around everywhere I went. Eventually, I had to give in and say” OK I will be your friend” I’m holding my firstborn Cailey, cute as a button♥️😂♥️ @cailey_avila @1steveburton #family #loveyou #friends @generalhospitalabc.”

The pic garnered tons of heart emojis from fans who were delighted by the three beaming faces in Benard’s photo.

If only Steve and Maurice’s characters were having as much fun in reel life as their portrayers are in real life!

General Hospital Spoilers – What Is Next For Jason Morgan And Sonny Corinthos In Port Charles?

Sadly, there is no joy in Port Charles for Jason and Sonny. There are up to their ears in conflict and drama, both on the personal and the professional fronts.

They are still dealing with Cyrus Renault (Jeff Kober) trying to horn in on their territory and now he has upped the drama by pushing drugs through the town. It just got personal when this week Cyrus “test drove” a new product on their friend Sasha Gilmore (Sofia Mattsson) who OD’d.

And what should fans make of the continued meetups between Britt Westbourne (Kelly Thiebaud) and Stone Cold? He has a reason to want to get on her good side, ie, find out what Cyrus is up to, but will his interest in her go beyond the professional realm?

Some fans are speculating that Bason is inevitable given the way the show is pushing them together and at the same time ignoring JaSam. It seems on the surface that these two are very mismatched, but hey, opposites attract, right?

What do you think GH fans, is JaSam circling the drain? Do we really need to see The Britch and Stone Cold hook up?