The Young And The Restless Spoilers: Devon’s Interest In Amanda Grows – Nate Blames Him For Jeopardizing HIs Career 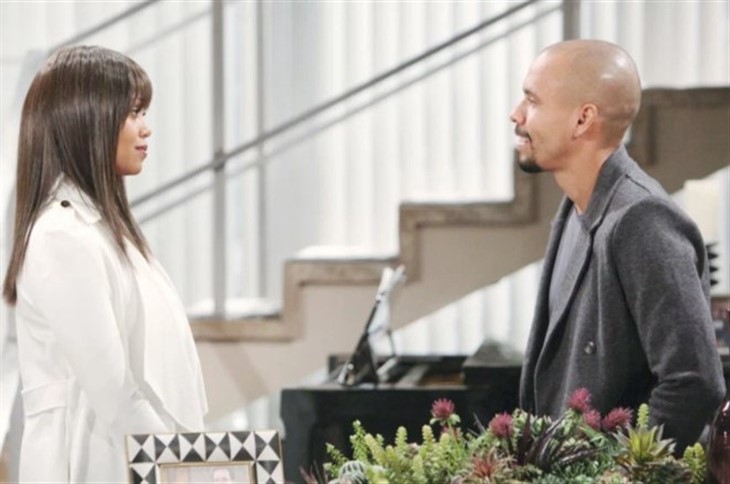 CBS The Young and the Restless spoilers document that in Genoa City, Wisconsin Devon Hamilton (Bryton James) is interested in developing a personal relationship with Amanda Sinclair (Mishael Morgan). This dramatic shift in his stance is, of course, because of what happened between Elena Dawson (Brytni Sarpy) and his cousin, Nate Hastings (Sean Dominic).

In the meantime, Elena finally admitted that yes, she does have feelings for Nate. That statement will prevent him from leaving town. However, he’s not in a forgiving mood when it comes to the injury he suffered.

Nate rightfully blames Devon for jeopardizing his surgical career. The punch that Dominic’s character received caused him to take a fall, which created potential, permanent damage to one of his hands.

As hardcore viewers recall, Nate was the surgeon who worked on Hilary Hamilton (Morgan) after she was hurt in the car accident where Lily Winters (Christel Khalil) was at the wheel. He was able to prolong Hilary’s life for a matter of days. But Nate wasn’t able to save it, as her injuries were too significant. She also lost Hevon’s expected first child before dying.

Savvy soap fans can project a scenario where Nate eventually has full use of his hand restored and uses that reclaimed ability to save Devon’s life, which is the type of event that would allow each man to forgive. But obviously, this arc is far from reaching that potential point.

So much happened so quickly that Elena didn’t have time to process all of it. The fans can relate, as they saw a likable couple implode, two new potential couples form, and a new family rivalry begins within a short sample of episodes.

Nate’s pressure and persistence enabled Elena to admit to herself that she does care about him. Whether she does or will love him more than Devon, is intriguing.

There’s no doubt that Elena and Devon were in love. But their relationship doesn’t seem to have been deep.

The Young and The Restless Spoilers: Lily Wants A Family Holiday -Turns Into A Battle Between Nate and Devon #yr #youngandrestless https://t.co/mT7RdtYS64

Amanda recognizes Devon’s interest but is genuinely focused on confirming her mother’s identity. Rose Turner (Leslie Stevens) is likely the woman who adopted Hilary but didn’t give birth to twins.

For the moment, Amanda needs to pursue the leads her private detective has uncovered, as she tries to determine her backstory. Devon wants to be part of this process, with Amanda realizing that he has a stake in this process.