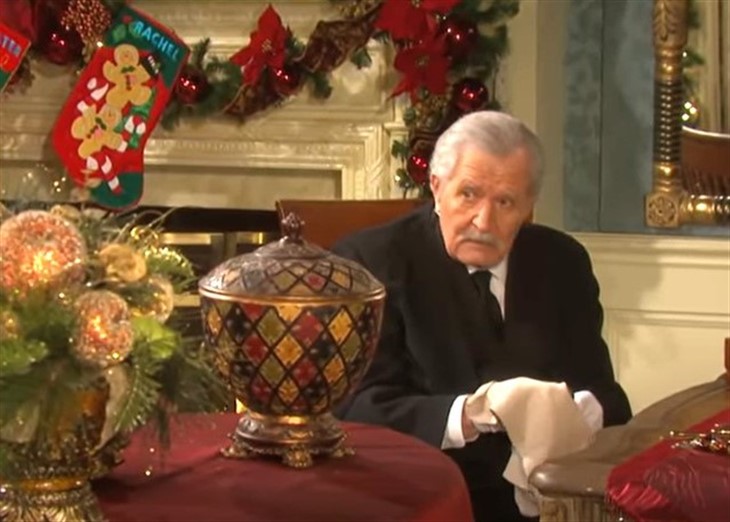 Days of Our Lives spoilers reveal that the winter promo shows that in Salem Victor Kiriakis (John Aniston) gets punished for the baby swap. He doesn’t go to prison but ends up losing everything. In addition to that, Victor is forced to be Kristen DiMera’s (Stacy Haiduk) hired help. He says he’s a butler, but Kristen has Victor performing the duties of a maid.

Days Of Our Lives Spoilers – Kristen DiMera A Free Woman

DOOL spoilers reveal that in the winter promo released during the Day of Days event, a lot of shockers were unveiled. Not only do we have several big returns, but there’s something very interesting going on at the Kiriakis mansion. For one, Kristen is not in prison anymore and is happily reunited with Brady Black (Eric Martsolf).

In the winter promo, Kristen walks away from Brady for a moment. She goes over to where Victor is polishing silver and tells him that he missed a spot. Victor responds gruffly that he is the butler, not the maid. However, polishing silver isn’t really a butler duty. It’s the job of a maid or housekeeper. Plus, we like calling Victor a maid after him getting away with so much over the years. It’s much more enjoyable than him going to prison!

Days of Our Lives spoilers reveal that Victor isn’t the only one punished. Xander Cook Kiriakis (Paul Telfer) helped with the baby swap. So, he is no longer the co-CEO of Titan. He goes back to being just a groundskeeper and he is clearly furious about it.

While we love the idea of Victor and Xander being punished in such a humiliating way, there is another possibility. Could Kristen just be dreaming? Is this her fantasy of the ultimate Christmas miracle? Or could this actually be happening?

Do you think Kristen DiMera really gets out of prison and has Victor Kiriakis being her hired help? Or is this just a vivid dream or crazy fantasy? We will have to keep watching the NBC soap opera to find out!