General Hospital Spoilers: Ava Gives Julian An Ultimatum, ‘Get Out Of PC Now, Or I’ll Kill You Myself!’ 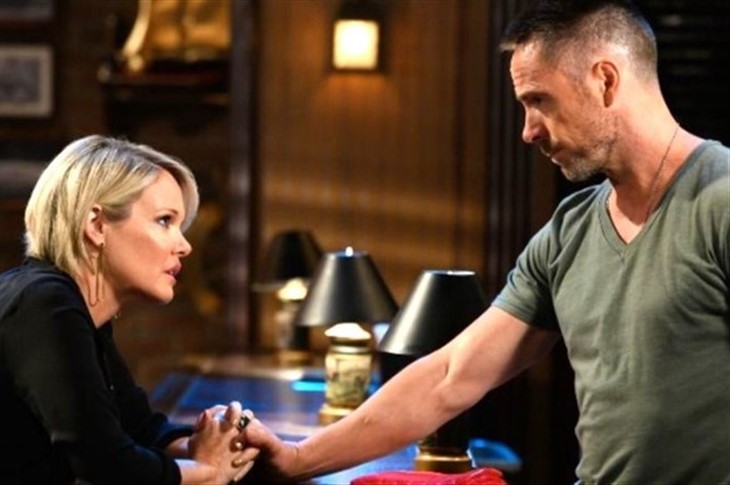 ABC General Hospital spoilers and updates tease that in Port Charles Ava Jerome Cassadine (Maura West) will give Julian Jerome (William DeVry) an ultimatum this week on GH. She is frantic to save her brother, and she tells him either he gets out of Port Charles now, or she’ll kill him herself!

General Hospital spoilers for Tuesday, November 24 show Ava confronting Julian down on the docks, likely near the site of the explosion. She is frantic, telling Julian he could have been killed! Viewers will recall he made a phone call to Cyrus Renault (Jeff Kober) after he found his grandson Danny Morgan’s (Porter Fasullo) ball cap, assuming the worst!

He was angry at Renault, telling him a whole restaurant full of people blew up when Cyrus had assured him that only Jason Morgan (Steve Burton ) would die! But luckily for Danny, Jason had taken him out of the restaurant and over to the Quartermaine mansion before the blast – he must have just dropped his cap! But Julian will be in big trouble with Renault once he finds out that the blast didn’t kill Jason – and since Julian didn’t know Jason survived when he made the call, Renault will assume Julian lied!

Julian may confide what Cyrus blackmailed him into doing, and as viewers will recall, it was all over that letter that Nelle Benson Jerome (Chloe Lanier) gave to Ryan Chamberlain (Jon Lindstrom) that implicated him in holding back the truth that Wiley Corinthos (Erik and Theodore Olson) was really Sonny Corinthos’ (Maurice Benard) grandson, not his. Then Cyrus made sure to tie up another loose end – although his minion didn’t succeed there, since Brad Cooper (Parry Shen) also survived!

Ava had offered Julian a way out through her husband Nikolas Cassadine (Marcus Coloma) who had offered to help him get out of town. But Julian didn’t take it! Nikolas is well able to make someone disappear, and many times without a trace – he’s done it before, including with himself!

By this time, Ava and Julian will probably both know that Jason survived and Julian may have a target on his back. Nikolas undoubtedly will hear about what went down at the Floating Rib and the injuries and deaths of his mother, Laura Collins (Genie Francis). Julian wants to handle things himself, but he’s not doing a real good job of it. Hopefully, he will know by now that Danny survived so at least he didn’t kill his own grandson by planting that bomb.

Nikolas won’t be happy that his sister Lulu Spencer (Emme Rylan) was injured, and by this time perhaps worse things have happened but he’ll still understand Julian was blackmailed into what he did. Ava has lost so much in her life and still isn’t over losing her daughter Kiki Jerome (Hayley Erin) and still blames herself.

She’s not about to lose her only brother! She’ll get so frustrated with Julian she might go ballistic at him and remind him he’s got a target on his back now from Cyrus, and if he doesn’t do anything to protect himself and get out of town, she’ll kill him herself!