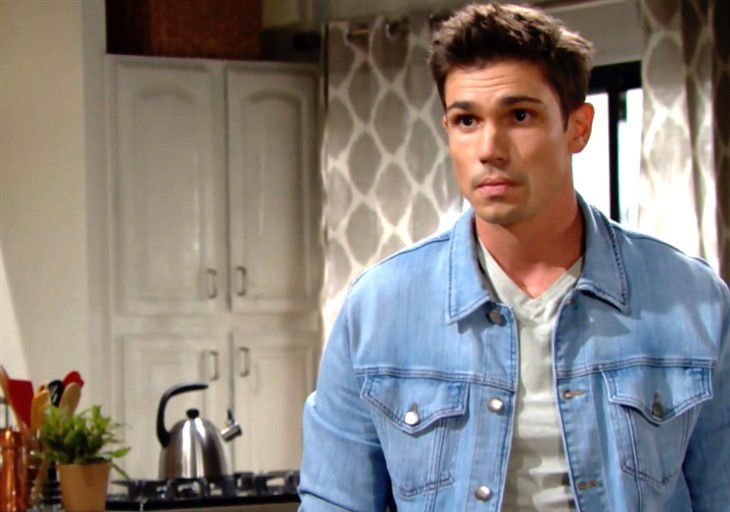 The Bold and the Beautiful spoilers document that in Los Angeles John Finnegan (Tanner Novlan) is the best chance Liam Spencer (Scott Clifton) has to stop Thomas Forrester (Matthew Atkinson). While a number of people, including Finn, don’t want to accept what Liam is currently saying, Clifton’s character is pushing on.

As readers of this site are aware, a teaser indicates that Liam appears to believe Thomas and Hope Spencer (Annika Noelle) share some romantic time together. However, Liam seems to mistake the Hope mannequin for his actual wife.

Big time kudos to B&B’s writing staff for incorporating the use of mannequins into the script. Executive producer Bradley Bell has spoken publicly about using these props as part of the return to work protocols.

Actors have been working with mannequins in various scenes that appear to portray close proximity between at least two people. There are times when an actor’s real-life spouse, or significant other, is working on the set as a mostly unshown body double.

Thomas’ off-beat history and Atkinson’s performances since he became the recast for this character in 2019, make this particular scenario ideal. So, having Thomas develop a relationship with plastic Hope is a daytime call that’s created an already memorable storyline.

The Bold And The Beautiful: Katrina Bowden In ‘Born A Champion’, Movie Stars Dennis Quaid And Sean Patrick Flannery

Liam is right to be uneasy where Thomas is concerned. It’s not just his track record that is concerning, but his current actions are deeply troubling.

Why would Thomas have taken the Hope mannequin to his apartment and then withheld the fact that he did so from Charlie Webber (Dick Christie)? That’s a strong point that Hope and Steffy Forrester (Jacqueline MacInnes Wood) have blown off because they want to believe that Thomas is making progress in his supposed attempt to be a better person.

Liam’s plea to Finn has fallen by the wayside but did at least inform Steffy’s, new love. Novlan’s character is primed to be involved in the identification of Thomas’s symptoms and, or condition in the near future.

B&B’s write-in of Finn served as a break from a well-worn past, where Liam was the central romantic figure between Steffy and Hope. Finn’s presence and Steffy’s clear take on him should allow this couple to persist indefinitely.

Due to their bond, Finn will remain aware of Thomas’ exploits. With that and Liam’s continued persuasion, Novlan’s character projects as a key figure in helping to reveal that Thomas has a condition that must be addressed through a proper examination and diagnosis.