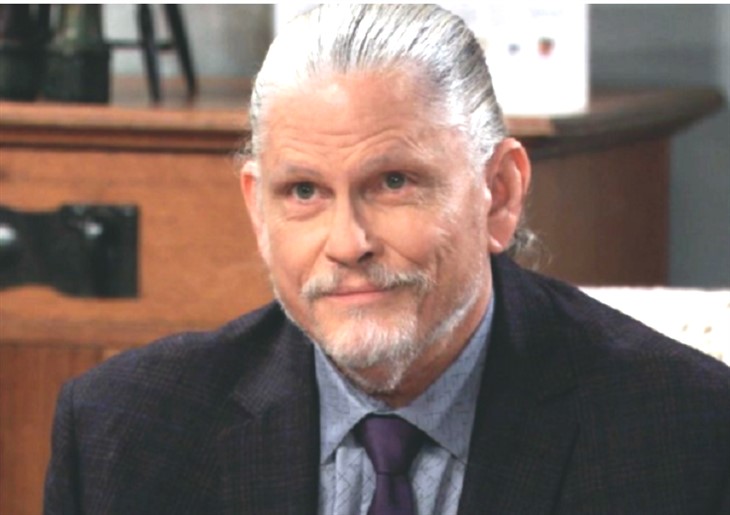 General Hospital spoilers tease that in Port Charles, NY the rumors regarding Rick Webber (Chris Robinson) having been Cyrus Renault’s (Jeff Kober) “guest” at the house on Wilson Street, Astoria Oregon, and his father, making him Laura Collins’ (Genie Francis) half-brother cannot possibly be true, and here’s why!

The proponents of this theory, that Cyrus has been caring for a not so dead Rick are tied up in one nice neat little package, giving Cyrus a reason that makes sense for wanting to take over General Hospital, his firing of Monica Quartermaine (Leslie Charleson), and his hatred of Laura. They also tie the case file into this that Cyrus had requested.

Monica was once married to Rick and had been having an affair with him in their younger years, having left her husband Jeff Webber, (Jeffrey Dean Anderson) Elizabeth Webber Baldwin’s (Rebecca Herbst) for Rick. Later she left Rick for Alan Quartermaine (Stuart Damon)!

Both Rick and Alan were quite the ladies’ men back in the day! But one big reason that this theory won’t work is that Rick has been dead for only eighteen years – clubbed over the head with a large candlestick by Scotty, hearing noises up in the attic of a home that the Webbers used to live in, now belonging to the Scorpios.

General Hospital Spoilers and Rumors: Michael Goes Back To Sasha, But Still In Love With Willow?

Laura had been looking for a wedding dress that was stored up there to remarry Luke Spencer (Anthony Geary) and had traumatic memories resurface of seeing Rick cheat on her mother with a nurse, Theresa Carter (Alicia Arden), and had killed Theresa as a teenager. Rick and Scotty had buried the nurse in the backyard and covered it up. Laura had also killed an older man named David Hamilton (Jerry Ayres) as a teenager, not too long before killing Theresa. Scotty had thought the noises were a prowler and knowing Laura was up there, came up to a man from behind and killed him with the large candlestick; it turned out to be Rick!

Cyrus had demanded a file dating back to the 1970s from Police Commissioner Jordan Ashford (Briana Nicole Henry). If it related to Rick’s murder, and he’s alive, why would Cyrus want it? Laura already had probation for the David Hamilton case, and she can’t be tried for his murder again; the file does no good for Cyrus in that case either if he’s trying to bust her!

Plus, Curtis Ashford (Donnell Turner) had found a partially burned letter from Cyrus to someone in the fireplace; signed with “Love, Cyrus”. It’s sweet for a little boy to sign a letter to his daddy that way but it’s unlikely with a full-grown male to another full-grown male! It might make sense if Rick had raised Cyrus, but that doesn’t really fit either.

More than likely, the mystery person Cyrus was having cared for does not relate to the forty-something-year-old case. If Cyrus were either David Hamilton’s son or Theresa Carter’s son, then that might tie it together but it still wouldn’t explain who he was caring for. David Hamilton was a widower, and while Theresa could have been his mother, that still leaves unexplained who he was caring for in the house in Astoria, Oregon on Wilson Street!

The only possible explanation there would be that if he is Theresa’s son, he might have taken her maiden name since her last name was Carter, and his father and he moved away after giving up the search for Theresa, who would have been considered a missing person. Cyrus could have had a sister who was now in need of caretaking now that they are older, either a much older sister (more likely) or one close to his own age, but possibly having been injured in a serious accident or suffering from a serious disease. We know her breathing would have been impaired, as Curtis found an empty oxygen tank unless it was a leftover of a long-gone bomb ingredient. However, empty medicine bottles were also found and a room set up like a hospital room.

Curtis didn’t mention any name on the prescriptions; he and Jordan took them as evidence and to assist in their further investigation. Of course, chances are that the prescriptions were in an alias anyway so it will take more digging to find out whose they were! But the most likely scenario would be the one where there is no relationship between the case file and the person Cyrus was caring for, and they are two different situations!