The Young And The Restless Spoilers: Nate’s Good Will and Elena’s Efforts Pay Off – Devon Makes Peace 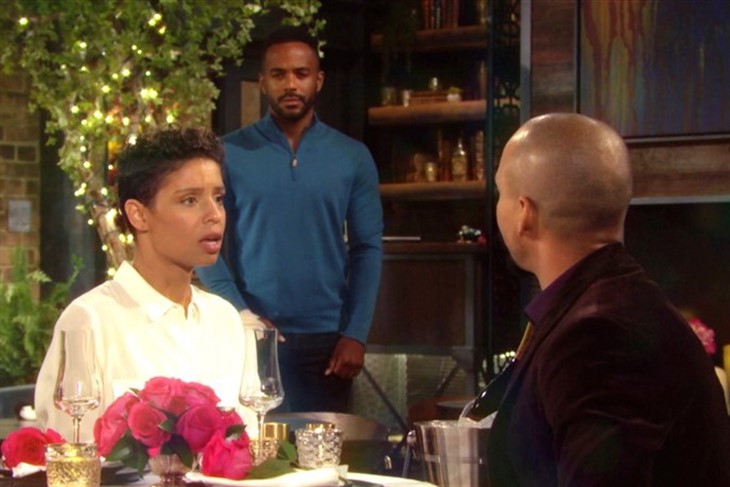 The Young and the Restless spoilers document that in Genoa City, Wisconsin Nate Hastings (Sean Dominic) has gained hope that he and Elena Dawson (Brytni Sarpy) will have a new life together. But he remains very uncertain about the injury he suffered to his hand and whether he’ll ever be able to perform surgery again.

An unexpected meeting with his cousin, Devon Hamilton (Bryton James), at Society was chilly, to say the least. Both men are furious with each other, as both people believe they’ve been wronged.

However, Elena’s decision to act on Lola Rosales’ (Sasha Calle) advice adjusts the dour dynamic that’s been in place since the day Nate and Devon’s lives changed.

Young And The Restless Spoilers – Not Planned, But Inevitable

Lola is totally right. Elena needed to search for her heart. While she loved Devon, it does appear that Nate is her new destiny.

Sure, Y&R can always write Devon and Elena back together someday. But Nelena projects as the couple that replaces the one-year plus relationship that Elena formed with Devon.

The Young And The Restless Spoilers: Adam Lock Up Brings Chelsea’s Love & Loyalty – Sharon Gets The Blame

Viewers know that James and Sarpy are an endearing real-life couple, with all being well in the real world. Their scenes as an on-screen pairing didn’t have to comply with safety protocols since they are significant others. Writing these characters away from each other allows both solid actors to work in fresh plot areas.

Young And The Restless Spoilers – Nate Hastings Is The Greater Victim

Yes, Elena broke their relationship. All trust was eliminated the moment she told Devon what happened with Nate. She didn’t know at the time that also meant Nelena was in its infancy.

So, Devon was the fully wronged party, with Amanda Sinclair (Mishael Morgan) being a modestly aggrieved party as well. She and Nate had just started dating, but he did sense that Amanda was smitten with Billy Abbott (Jason Thompson) in the recent past.

Nate seems likely to regain his ability to perform surgery in the future. His injury hasn’t been confirmed as permanent. So, the focus is on his personal life, with professional matters being temporarily shelved.

The Young And The Restless Spoilers Next Week: Abby’s Wedding Day Breakdown, Says She Can’t Do It #yr #youngandrestless https://t.co/Sm2bOL8pWN

Elena was smiling while talking with Lola, which clearly indicated that Sarpy’s character is already starting to deal with the end of her time with Devon. She didn’t marry him and they had no children. Basically, both people need time to rectify their emotions and bond with what appears to be their new loves.

Nate is a good match for Elena. They not only share a profession but also seem to have a different type of spark then she shared with Devon.

As for Amanda, everyone in Genoa City, Wisconsin, and all observers of this famous setting saw the potential for Devon to develop a relationship with the late Hilary Hamilton’s (Morgan) sister since this new character first appeared last year.