Days Of Our Lives Spoilers Next Week: Bonnie Makes Justin Jealous, But Will It Backfire On Her? 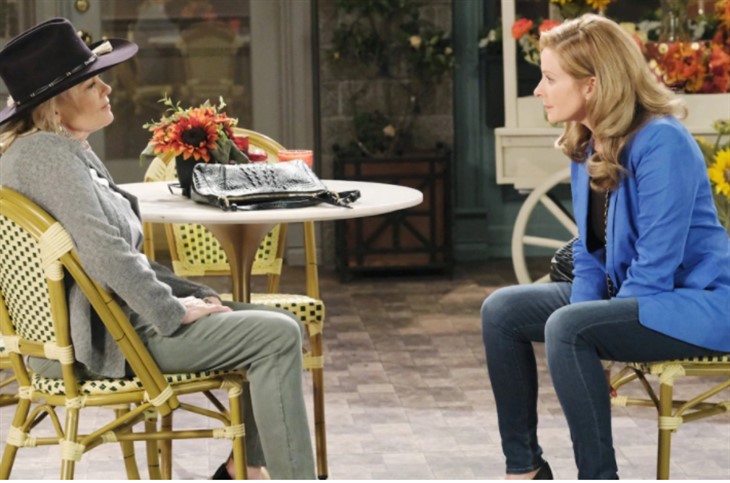 Days of Our Lives spoilers for the week of December 7 reveal that in Salem Bonnie Lockhart (Judi Evans) will try to make Justin Kiriakis (Wally Kurth) jealous. She doesn’t do this alone, though. She has her new unlikely pal, Jennifer Horton (Cady McClain), who has her own reasons for participating in the scheme. Keep reading to find out what to expect.

DOOL spoilers reveal that when Bonnie showed up at Adrienne Kiriakis’ (also played by Judi Evans), nobody expected her to have a romance with Justin. Even though the widow didn’t want anything to do with Bonnie, that wouldn’t last. Over time, he would feel compelled to help her win a case against her publisher. Then, the two would become friendly. In the next few weeks, expect Justin and Bonnie to get even closer.

When the actress returned as Bonnie, she told Soap Opera Digest that Bonnie would be a changed woman, but not totally different. While she does regret her devious actions in the past, she is still a bit of a schemer. That will be proven in the next two weeks when she decides to make Justin jealous.

Days of Our Lives spoilers from the winter promo suggest that Bonnie won’t be doing this scheme by herself. Jennifer joins Bonnie, which is really unexpected because of the felon’s history. In the video clip, we see Bonnie and Jennifer having drinks with two men. Meanwhile, Justin and Jack Deveraux (Matthew Ashford) are standing in the distance watching.

So, it seems likely that Jennifer and Bonnie are scheming together. While Bonnie wants to make her man jealous, Jennifer wants to hurt Jack and let him know that there are other guys out there.

Days Of Our Lives Spoilers Next Week: Tripp Discovers Ava Is Alive, Rages Over Being Abandoned Again? #Days #DOOL #DaysOfOurLiveshttps://t.co/BQnR19vXI6

DOOL Spoilers – Will The Plan Backfire?

Even though Bonnie thinks that her scheme is a great idea, Justin might not react the way she wants. She hopes that he will be jealous and fight for her. But Justin is more of the type of man who will just let a woman go if she’s interested in someone else. He learned that the hard way with Kayla Brady (Mary Beth Evans). But what about Jack and Jennifer? Is there any hope for these two or is their marriage really over?