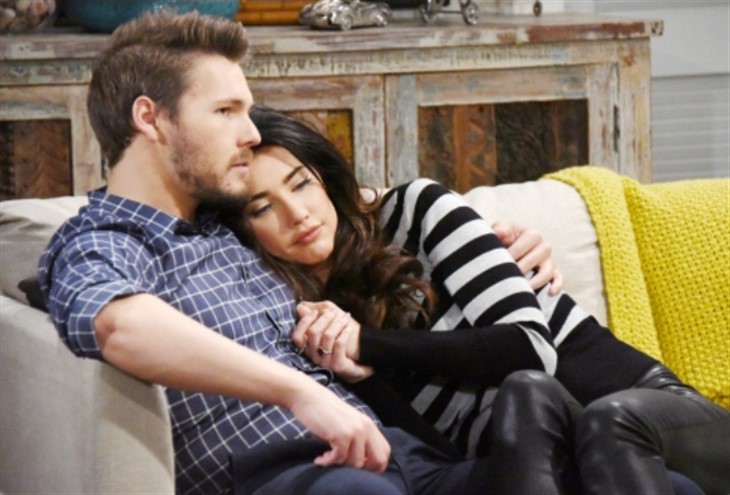 The Bold and the Beautiful spoilers indicate that in Los Angeles Steffy Forrester (Jacqueline MacInnes Wood) will jeopardize her relationship with John “Finn” Finnegan (Tanner Novlan) when she sleeps with Liam Spencer (Scott Clifton).

Upcoming previews state that Steffy and Liam will sleep together after a drunken night together. Steffy and Liam’s night of passion has already created a stir with fans, who are wondering where this leaves her and Finn.

The Bold And The Beautiful Spoilers – Steffy Forrester’s mistake

After going through so much heartache with Liam in the past, Steffy was ready to move forward with Finn.

The handsome doctor has been a huge support for Steffy as she recovered from her accident and later pill addiction.

With Steffy now having a new outlook on life, she and Finn began discussing their future.

However, Steffy’s ex Liam remains in the picture, and his actions may lead to trouble for Steffy and Finn.

Liam then drives over to Steffy’s house to seek comfort from her. After a few drinks, one thing leads to another, and the exes hit the sheets.

Steffy’s night with Liam will no doubt leave her with a mixture of emotions.

Of course, she’s going to feel guilt for betraying Finn. She loves him and was looking forward to starting a new life with him, but she may have thrown that out the window.

Aside from guilt, Steffy is now left with confusion. Steffy will always love Liam, the two share a daughter and will remain a part of each other’s lives. However, she couldn’t go on with the back and forth between her and Hope.

With Liam having his own family with Hope, Steffy realized she had to move on too. Yet, her and Liam’s passionate encounter will once again leave her questioning their future.

When Liam visited her he was distressed thinking Hope cheated on him with Thomas. He believed that his marriage to Hope was over. However, once he learns the truth, it’s going to change everything.

Odds are Liam will stay with Hope, however, he won’t stop thinking about his night with Steffy. He’ll start to wonder if Steffy is indeed the right woman for him.

Although Steffy and Liam will try to move on as nothing happened, eventually their secret is going to come out.

Steffy’s infidelity is going to wreak havoc on her relationship with Finn. There’s going to be a lot of hurt on both sides.

Finn will be upset because he helped Steffy through a difficult time, and he loved her with all his heart. Now, their plans for the future could be over.

As the fallout from their affair settles, Steffy will have to decide whether to save her relationship with Finn or risk giving Liam another chance.