Days Of Our Lives Spoilers Next Week: Kristen’s Early Release, Gets Sprung After Ratting Out Ava? 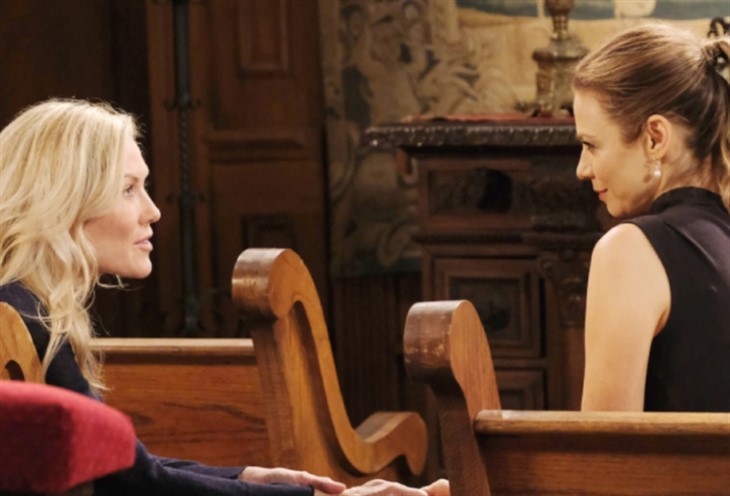 Days of Our Lives spoilers for the week of November 30 reveal that Ava Vitali (Tamara Braun) will visit Kristen DiMera (Stacy Haiduk). Even though the two are friends, Kristen doesn’t seem happy with her. Next week, Ava being alive will be discovered, but how does that happen? We know that Kristen gets released in a few weeks. Could she make a deal and betray Ava?

DOOL spoilers from the winter promo show Kristen is out of prison and enjoying Christmas with Brady Black (Eric Martsolf) and their baby girl. But if she is serving a five-year sentence, how does she get sprung so early? Or was this scene just a dream or fantasy of Kristen’s? There is one possibility that could explain her getting released so early and it has to do with her secret friend, Ava Vitali.

In a sneak peek photo published in the new issue of Soap Opera Digest, Kristen is arguing with Ava. She seems to be pleading with the woman and Kristen has her hands very firmly placed on Ava’s upper arms. The villain is being defiant, has her arms crossed and is looking away from Kristen, like she’s pouting.

Days of Our Lives spoilers for the week of November 30 also reveal that Steve “Patch” Johnson (Stephen Nichols) sees someone from his past. Around that same time, Tripp Dalton (Lucas Adams) learns that his mother is alive. Could both of these scenes be related to Kristen DiMera?

Days Of Our Lives Spoilers Next Week: John’s In Big Trouble, Belle Tries To Keep Him Out Of Prison https://t.co/aLymmB4Wz2 pic.twitter.com/cKxRDx8dEV

It is possible that Kristen’s appearance in the winter promo, Tripp and Steve finding out Ava is alive, as well as Kristen being upset with her visitor is all rolled into one big plot. Could Ava be planning something terrible that Kristen doesn’t agree with?

If pleading with the dead Salemite doesn’t work, Kristen might feel she has no choice but to tell Brady Black (Eric Martsolf). He might decide that this can work in their favour. If they tell DA Melinda Trask (Tina Huang) that they can give the location of Ava, who is actually very much alive, then she might agree to release Kristen early. However, could there be consequences for Kristen’s betrayal?