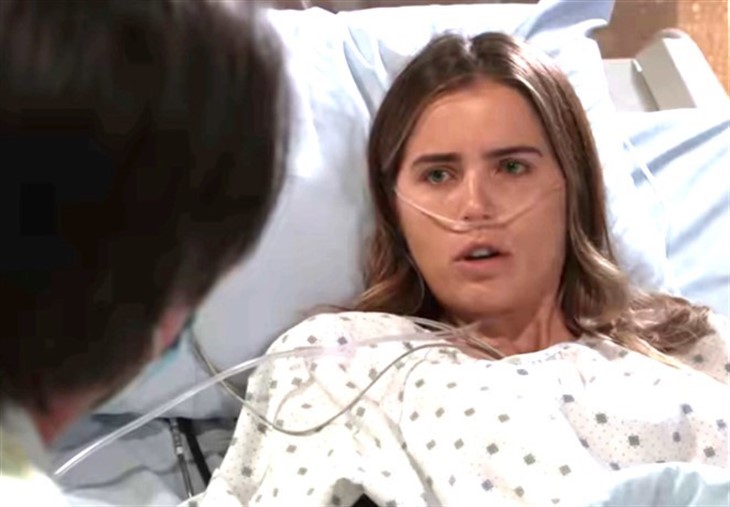 General Hospital spoilers tease that in Port Charles, NY when Sasha Gilmore (Sofia Mattsson) finally awakens in the hospital, she finds out that she had a heart attack the night before.

At the Quartermaine mansion, Michael Corinthos (Chad Duell) and Willow Tait Corinthos (Katelyn MacMullen) talk in front of the fireplace. Willow tells Michael that it’s hard to believe that it’s Thanksgiving. Michael tells her she’s right, especially since the events of the previous night seem to have changed everything.

He then tells Willow that he had never even had the chance to tell her about what his mother, Carly Corinthos (Laura Wright) had told him about the fabricated affair between Sasha and Detective Harrison Chase, (Josh Swickard) had lied to them about, for their own good! Willow tells Michael that she already knows. Michael asks when did she find out? Willow tells him that Chase told her when he was in Sasha’s hospital room last night.

General Hospital viewers will recall that this was when Nelle Benson Jerome (Chloe Lanier) was trying to get custody of Wiley Corinthos (Erik and Theodore Olson) and it was felt if Michael was married, especially to Willow, it would look better in family court. Sasha’s past of pretending to be Nina Reeves’ (Cynthia Watros) daughter hurt their chances, although she had been willing to get married right away. But Sasha wasn’t quite sure she was ready to be a mother, although she loves Wiley. So, Chase, and she collaborated to push Michael and Willow to each other.

GH Spoilers – Sasha Wakes Up In The Hospital

In her room at General Hospital, Sasha finally begins to stir and wake up. Epiphany Johnson (Sonya Eddy) is with her, and tells her good morning – or should she say good afternoon! Sasha groans. Epiphany tells her that her numbers look much better this morning.

Then she tells her “Happy Thanksgiving”. Sasha, confused, asks, “Thanksgiving?” Sasha wants to know why she’s there and how long she’s been there! She asks Epiphany how long was she out? Epiphany tries to calm her and tells her to stay put. She tells her that they gave her some light medication to help her sleep, then reminds her that she had a heart attack last night! Sasha is shocked; and confused! She asks Epiphany to repeat, a heart attack?

She tells her she has to be kidding! Sasha says she’s too young! Epiphany informs her she didn’t have a heart attack because of her age, but because of the massive amounts of illegal drugs found in her system! Soon she is bound to remember what happened the night before and that Cyrus Renault (Jeff Kober) gave her those drugs when they were having dinner at his place!