The Bold And The Beautiful Spoilers: Zende ‘Silently Suffering’ As Zoe Plans Her Wedding 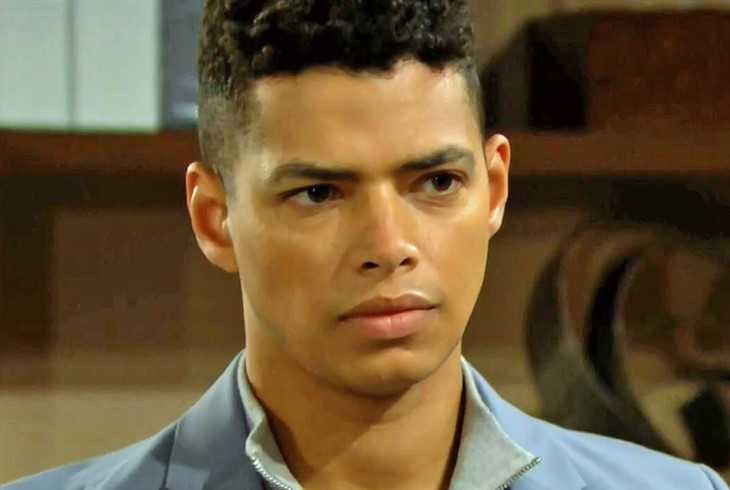 The Bold and the Beautiful spoilers reveal that in Los Angeles Zoe Buckingham (Kiara Barnes) has agreed to marry Carter Walton (Lawrence Saint-Victor). However, it is clear that she’s not completely committed to him. She has feelings for Zende Forrester (Delon de Metz) as he does for her. It is teased that Zende will “silently suffer” as Zoe plans her wedding.

The Bold And The Beautiful Spoilers – Carter Walton’s Quickie Romance

B&B spoilers reveal that Carter was instantly smitten with Zoe. He tried to make passes at her before, but she either wasn’t available or wasn’t ready. After her wedding to Thomas Forrester (Matthew Atkinson) came crashing down, she finally got to know Carter a little better. Even though Carter seemed to fall in love (or lust) rather quickly, Zoe didn’t seem that into him. She admitted that he is a really “sweet” guy, but that’s code for friend-zoning men.

During Carter’s dinner party, he proposed to Zoe. She didn’t know what to say and then, just by a magical coincidence, the fire alarm went off. While everyone left to investigate, Zoe and Zende were alone. Trying to speak over the blaring alarm, Zende found out about the proposal. Then, he gave Zoe the “okay” to marry Carter. It was like she was asking his permission instead of making up her own mind.

The Bold And The Beautiful Spoilers – Zende Forrester ‘Silently Suffering’

The Bold and the Beautiful spoilers reveal that Zende will continue having a difficult time watching Zoe marry Carter. In fact, the new issue of Soap Opera Digest stated that Zende will “silently suffer” over it. Now, we know that love triangles never resolve quickly, especially if there is no intimacy. We know Carter and Zoe have slept together, but she hasn’t done that same thing with Zende yet. So, it’s just a matter of time before that happens and in true soap fashion, she will end up pregnant. So, expect a “who’s the daddy” storyline in the near future.

The Bold And The Beautiful Spoilers: Quinn Investigates! Spies On Eric And Shauna, What Will She Discover? https://t.co/SDleQmGIIU pic.twitter.com/sUiE5ZOIAC

While Carter and Zoe are planning their wedding, Zende tries to get his mind off of the woman he desires. Even though Paris Buckingham (Diamond White) isn’t Zende’s first choice, he considers dating her to get his mind off of Zoe. But just how long with that relationship last when he’s constantly thinking about her sister? Plus, no girl wants or should be a man’s “second choice.”