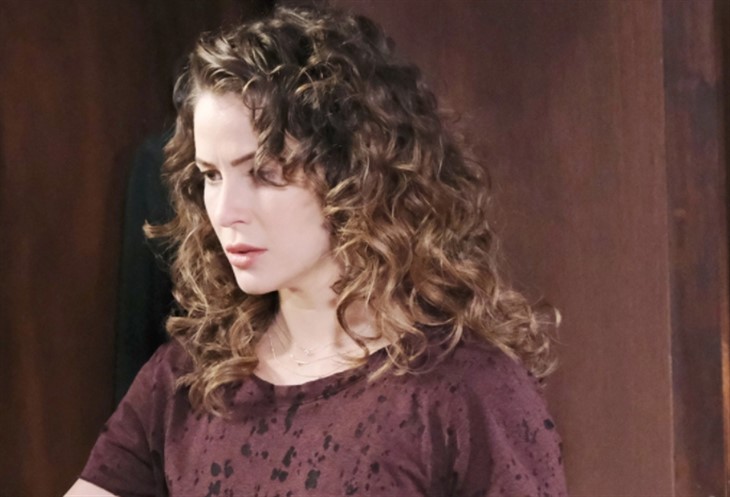 Days of Our Lives spoilers for the week of November 30 reveal that in Salem Sarah Horton (Linsey Godfrey) starts poking around. She is trying to get answers about Philip Kiriakis (Jay Kenneth Johnson) for Xander Cook Kiriakis (Paul Telfer). She even claims that they have broken up. However, Philip catches Sarah red-handed snooping through his personal items.

DOOL spoilers reveal that ever since Philip came back to Salem, Xander has been suspicious of why he’s really there. Besides the two men at war over the CEO position at Titan, Philip got his competition fired, but Victor Kiriakis (John Aniston) immediately hired him back. Now, Xander has noticed that Philip has been transferring Titan funds. He assumes that the Kiriakis heir is embezzling, but that’s not what’s actually going on.

At first, it was just Xander who was convinced that Philip was up to no good. Sarah was fooled by the heir in the beginning. But over time, she has begun to notice that something isn’t quite right. So, now “Xarah” are working together to try and figure out the truth.

They have tried to take pictures of Philip meeting Ava Vitali (Tamara Braun). They have followed him to an apartment and broke in trying to find clues. Xander called a prison connection to inquire about a visit. Next, Xander will interrogate Kristen DiMera (Stacy Haiduk) and “Xarah” will pretend to break up.

Days of Our Lives spoilers for the week of November 30 reveal that Sarah will go through Philip’s things. She is determined to find evidence of what he is really doing at Titan. It seems she might find something because it is teased that this winter, Xander gives proof to Victor. However, there are going to be some complications first.

It is teased that while Sarah is going through Philip’s personal items, she gets caught red-handed. Now, knowing Sarah, she will probably come up with a convincing excuse about what she is doing. However, will Philip really believe her act or is her cover going to be blown? We will have to keep watching the NBC soap opera to see how this story develops over the next few weeks.