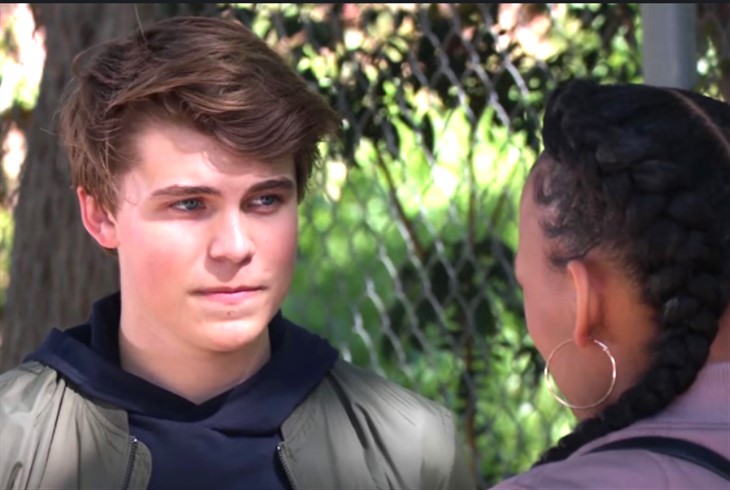 General Hospital spoilers and updates reveal in Port Charles, NY Cameron Webber (William Lipton) has not been the fastest in making up his mind between Trina Robinson (Sydney Mikayla) and Jocelyn Jacks (Eden McCoy). However, Dev Cerci’s (Ashton Arbab) interference may have pushed him to decide on Trina because he feels like Jocely has brushed him off. If Cameron chooses Trina can either of them’s friendships survive with Jocelyn survive?

General Hospital’s Trina and Cameron kissed months ago, shortly after the two were kidnapped together. However, neither of them acted on it afterward. Trina obviously still cares about Cameron and wants to see where a relationship can go with him. However, Trina has been walking on eggshells around Jocelyn because she is attracted to Cameron as well.

Cameron has been trying to decide what to do about the two girls. Unfortunately, Dev didn’t get to tell Cameron that he had stolen Jocelyn’s journal and changed parts of it to make it look like Jocelyn wasn’t attracted to him. Dev attempted to confess before he died, but he couldn’t get the words out. Cameron is making a decision without all of the needed information. Where will Cameron go from here?

If General Hospital’s Cameron has learned anything, it is that time waits for no one. Jocelyn was with Oscar and thought they would be together for the foreseeable future when he died. Cameron thought he had time to help Dev mend his relationships with both Jocelyn and Trina, now Dev is gone. Cameron’s step-father Franco Baldwin (Roger Howarth) has just learned that his tumor has returned. The last time Franco had a tumor it turned him into a killer and stalker. Cameron hopes that Franco survives but if he has learned anything by this tumor’s return, it’s that you cannot count on the future. Cameron needs to make a decision and it is likely to be Trina.

Trina and Jocelyn are very good friends. However, if Trina tells Jocelyn that she and Cameron are getting into a relationship it could end their friendship. Jocelyn is likely to feel that Trina doesn’t respect their friendship and decide to end it over Cameron. Will Jocelyn let a boy come between her and Trina’s friendship?