Days Of Our Lives Spoilers: Xander Finds Out Kristen Had A Mysterious Visitor, He Grills Her Info 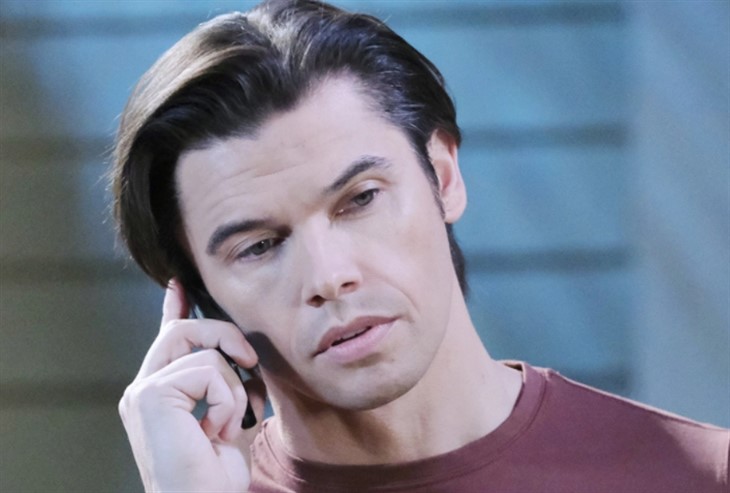 Days of Our Lives spoilers tease that in Salem Xander Kiriakis (Paul Telfer) will find out that Kristen DiMera (Stacy Haiduk) had a mysterious visitor at Statesville Prison recently. He interrogates her, but Kristen’s not spilling the tea!

Days of Our Lives viewers will recall from recent episodes that a not-so-dead Ava Vitali (Tamara Braun) visited Kristen DiMera (Stacy Haiduk) in Statesville Prison. It was newly revealed that they had met in a Italian convent where Kristen had recovered from being thrown through a glass window by Marlena Evans (Deidre Hall) after she had tried to kidnap Brady Black’s (Eric Martsolf) and Theresa Donovan’s (Jen Lilley) son Tate Donovan (Colin and Kyle Schroeder).

However, the two had never encountered each other in the Nashville warehouse where Dr. Wilhelm Rolf (William Utay) had been conducting experiments with a resurrection serum, which later blew up with Nicole Walker Brady (Arianne Zucker) in it. Later, not only Nicole, but Rolf, Tony DiMera, (Thaao Penghlis) Jack Deveraux (Matthew Ashford) were revealed to have survived, as well as Kristen herself.

Ava, however, revealed to Kristen that she got out on her own and had been hiding out until a more appropriate time to reveal herself, and Kristen promised to keep her secret. Ava doesn’t want to reveal herself because, after all, if people knew she was alive she could be considered a fugitive and be taken into custody! If anyone knows how that feels, it’s Kristen, and she’s totally sympathetic!

Days of Our Lives viewers will also recall that Xander and Sarah Horton (Linsey Godfrey) have been working together to find out who Philip Kiriakis’ (Jay Kenneth Johnson) secret partner is, who has been helping him funnel money out of Titan Enterprises into an offshore account! Sarah saw the secret partner when she followed Philip to her apartment but failed to catch a good cell phone photo of her.

If she had, Xander would have recognized Ava. They break into her apartment but find nothing that would tell them who she is. Xander, however, will not give up, and he finds out that Kristen had another female who came and visited her in Statesville Prison besides Lani Price Grant (Sal Stowers). Of course, Ava wouldn’t have signed her own name, and even though Xander has pilfered video from the Salem Police station before, he decides not to try it at Statesville Prison and go straight to the source instead!

Things may get a little heated between the two former co-conspirators since they long ago had a falling out when Kristen found out that he had conspired with Victor Kiriakis (John Aniston) to switch her live baby for Sarah’s dead baby. It’s a miracle Sarah was able to forgive him! Xander may get a little ugly but Kristen knows where his bodies are buried too. He can threaten all he wants, but she’s not spilling the tea about her old friend Ava!