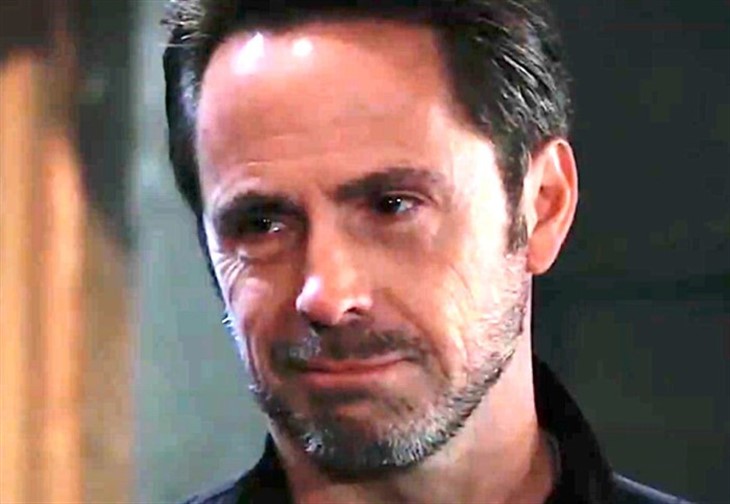 General Hospital spoilers tease that in Port Charles, NY Julian Jerome (William DeVry) may not be dead; Nikolas Cassadine (Marcus Coloma) also took a similar spill a few years ago and played dead for five years! Will Nikolas find Julian like he was found and pay it forward?

For one thing, General Hospital viewers will have noticed that Julian didn’t look severely injured. Bushes and other vegetation seem to have broken his fall if he is at the bottom of the cliff below Wyndemere Castle at all. He could have washed up somewhere. There was no blood anywhere, and he didn’t even look bruised, although he could have some broken bones.

Jason Morgan (Steve Burton) looked, and appeared to have even swam in the ocean surrounding Wyndemere, and didn’t find him. He and Sonny Corinthos (Maurice Benard) did allow for the slight possibility that Julian survived his plunge from the parapet. They may be thinking someone picked him up in a boat and it was planned – after all, that is how Jason survived, even though he was held prisoner for several years. Nikolas’s body couldn’t be found either after Valentin Cassadine (James Patrick Stuart) shot him on Cassadine Island.

He fell backward out of a window and was presumed dead for five years, although he played dead for the majority of it. That being said, Nikolas had offered to help Julian; to make him disappear, using his Cassadine connections. Julian turned him down at the time, but now he may not have any other choice!

When Nikolas returned, he revealed that he was found by fishermen from nearby Crete. They pulled him out of the waters and got him to medical attention. They saved his life. Nikolas was injured much more seriously than Julian appears to be. He spent time in a hospital for many, many months. When Sonny and Jason burst into Wyndemere Castle, Ava Jerome Cassadine (Maura West) was outside on the parapet preparing to blow her brother to kingdom come!

Then as they came outside to the parapet, Julian jumped off over the wall! Nikolas was at the hospital with his mother Laura Collins (Genie Francis) saying goodbye to his little sister Lulu Spencer (Emme Rylan) as she was being prepared to be transported to a long-term specialized care facility in Manhattan. Ava arrived late. Undoubtedly, Ava will tell Nikolas about what happened to Julian – but will she tell him that he was indirectly responsible for the bomb blast that injured Lulu so severely?

Perhaps not – Laura definitely blames Cyrus Renault (Jeff Kober) no matter whom he used for a patsy, and Julian was definitely a patsy! Perhaps even if Ava does tell him Julian placed the bomb, he may feel that he was a patsy too – after all, he knows Cyrus was blackmailing Julian!

Nikolas may do a search of his own for Julian, if for nothing else to give him a proper burial if he finds him dead. If Nikolas gets there in time, he might pay it forward by rescuing Julian and sending him far away to recover – and to disappear! After all, Nikolas has been learning the importance of family being family recently!