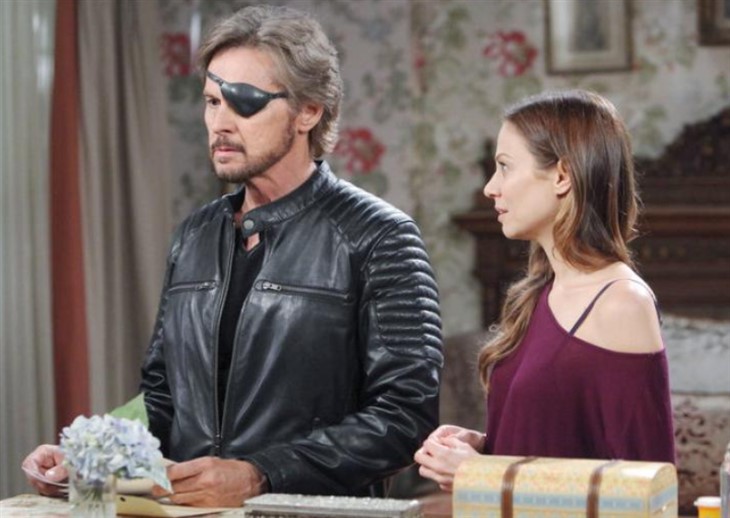 Days of Our Lives spoilers tease that om Salem Ava Vitali (Tamara Braun) will try to bargain with Steve Johnson (Stephen Nichols). But it sounds more like blackmail than a bargain!

Ava has to stay in town a while because she and Philip Kiriakis (Jay Kenneth Johnson) are working together on divesting Titan Industries of funds. They are laundering the money, and Ava feels like she has to keep her thumb on Philip to make sure it’s done and done right! Ava clearly has a problem with trusting people to do what she wants them to do without a “hands-on” approach – sometimes with her hands being on their necks!

She was forced to come out of hiding when she found out about her son Tripp Dalton’s (Lucas Adams) rape charges. She found out he was staying with Steve and Kayla Brady (Mary Beth Evans) and when she arrived at Kayla’s condo found Allie Horton (Lindsay Arnold) holding a gun on him! She quickly grabbed the gun out of Allie’s hand and turned it on her! Allie was lucky to escape with her life, Tripp had to talk his mother down!

But he told her that his half-brother Joey Johnson (James Lastovic) was in prison for her murder, and she needed to turn herself in. It isn’t something Ava cares about. As far as she’s concerned Joey can rot! Tripp doesn’t think he can protect her with Joey in prison for something he obviously didn’t do! Tripp feels he has to rat his mother out! Ava thinks she can use Joey as a bargaining chip to get Steve back, who she is clearly still obsessed with, plus she’ll want him to give her a cover while still in Salem!

Days of Our Lives viewers will recall that Steve came home while Tripp and Ava were at the table talking! Steve was understandably blindsided to see Ava is alive! Tripp might blurt something out about Joey, but he really wouldn’t have to – Steve’s mind will automatically go to the same place that Tripp’s did! He will also want to use the proof that Ava’s alive to get Joey released!

Ava still has the gun she took from Allie in her coat pocket, and she’ll use it if she has to! Even though she cares less about Joey, she posits that there are ways to let the authorities know she’s alive without turning herself in. She could have a photo of herself holding today’s Salem Spectator, showing the date, taken.

She could have it taken on a burner (untraceable) phone and send it to Steve. But there’s a catch – he has to keep her location a secret and provide her cover, as Tripp also does. That is the only way she’ll provide the photo proof that she’s alive for Steve to get Joey released.

She also knows that she cannot stay in the apartment she rented under the name Angela Vandekamp because she was told by Kristen DiMera (Stacy Haiduk) that Xander Kiriakis (Paul Telfer) has been snooping around. She tells Steve she wants to stay there in Kayla’s condo, with him and Tripp! Ava has a secret mission to win Steve back in the process. That’s not going to go over well with Kayla, but Steve and Tripp know they’ll have to play along with Ava to get that proof of life to get Joey out of prison!