Days Of Our Lives Spoilers: Chad Doesn’t Trust Jake, Catches Him In A Lie And Confronts Him 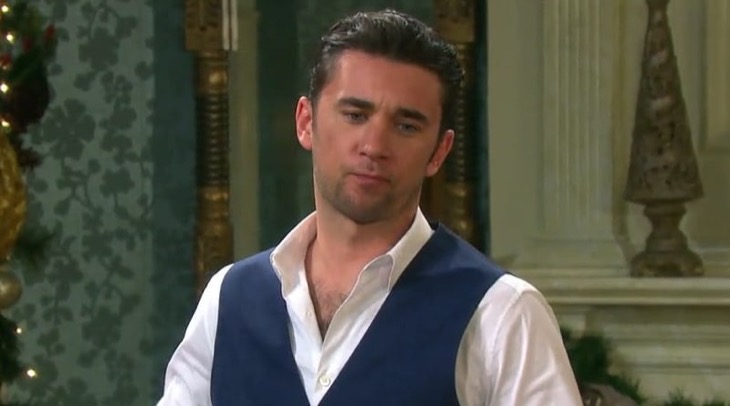 Days of Our Lives spoilers tease that in Salem Chad DiMera (Billy Flynn) will catch Jake Lambert (Brandon Barash) in a lie and he’ll confront him in an upcoming episode of Days of Our Lives!

Chad isn’t trusting Jake in general, and catching him in this lie doesn’t help! He doesn’t like that he maneuvered his way into DiMera Enterprises behind his back by talking to Li Shin (Remington Hoffman). Chad catches a shirtless Jake where he shouldn’t be shirtless, and he tells him he knows there’s another player involved – and he’s talking about playing bedroom games!

There is that subconscious thing at play, possibly, in Chad’s mind that causes him not to trust Jake as far as he could throw him. Longtime Days of Our Lives viewers will recall when Abigail DiMera (Marci Miller) developed dissociative identity disorder and one of her alters was “Gabby”, who wore a long black wig. In reality, it was her mind’s twisted way of emulating her former friend and now sometimes frenemy Gabi Hernandez (Camila Banus)! “Gabby” Abigail’s alter had an affair with and actually married Stefan DiMera (Brandon Barash), Jake’s twin, around the time their daughter Charlotte DiMera (Olivia and Oakley Rondou) was conceived.

But Abigail was involved with Chad at the same time again, so there was some question as to who was the father, Chad or Stefan! Chad probably can’t help but be subconsciously thinking about what happened between Stefan and Abigail/Gabby when he looks at his spitting image!

DOOL Spoilers – Chad DiMera Knows Jake Lambert Is Fooling Around With Someone But Gets It Totally Wrong!

Chad doesn’t come right out and say who the “other player” is when he confronts Jake about fooling around with someone, but it’s obvious he has it totally wrong.

All he would have to do is talk to Gabi Hernandez to get his facts straight, but because of the day he found Abigail’s scarf in Jake’s garage and found him comforting her the night of her parents’ anniversary party, he thinks Jake and Abigail are fooling around! In reality, as Gabi unceremoniously discovered, it’s Kate Roberts (Lauren Koslow) he’s fooling around with!

He has confronted him before about “comforting” his wife before, coming on very strong with the point that only he should be comforting his wife! Jake was just being a nice guy. After all, he might consider a sister in law as a sister. He’s done nothing wrong where Abigail is concerned. But now, Chad will also really put his foot in his mouth later in the week when he accuses Abigail of having an affair with Jake! He thinks Jake’s responses told him all he needs to know, but he obviously misread them! Abigail would be well within her rights to dispatch Chad to the gatehouse and out of her bedroom for sure!