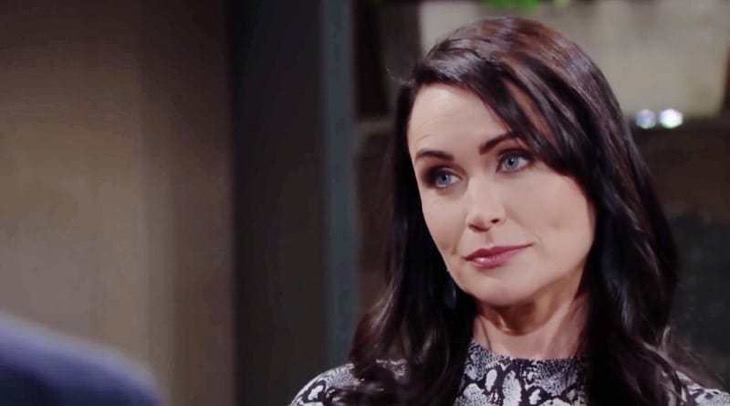 The Bold and the Beautiful spoilers tease that in Los Angeles Quinn Fuller Forrester’s (Rena Sofer) recent actions will be judged, in full, shortly. Eric Forrester (John McCook) holds the power to render a decision about the future of their marriage and is formulating his thoughts as this arc continues to unfold.

Quinn knows that she was wrong and was eventually willing to take full responsibility for what happened. While she didn’t directly betray Eric, her plan to work with Shauna Fulton (Denise Richards) to break Bridge and form a Shidge marriage intentionally disrupted the Forrester family, which was a major no-no.

Quinn fans could take a certain stance. They could attempt to shift the topic from Quinn’s actions to Eric’s response.

Claiming that Eric perceives his wife as though she were a child, or is on some level beneath her, would be intentional deception. Choosing to not mention Quinn’s purposeful aim at Brooke Logan Forrester (Katherine Kelly Lang) and avoidance of referring to Eric’s repeated calls for Quinn to stop going after Lang’s character would be part of a defense attorney-type strategy.

The Bold And The Beautiful Spoilers: Will Liam Confess His Infidelity To Hope? Vote Now!

Even including all points in the last section, it’s still fair to say that forgiveness is in play. Eric’s well-known character traits include kindness. He’s been reminiscing lately about all of the good times he’s spent with Quinn through the years and the many positive elements she’s added to his life. With that, forgiveness isn’t out of the question.

Quinn’s admission of guilt and the responsibility she’s taken do indicate, if not confirm, that she recognizes that what happened wasn’t right. Also, the vulnerability she exhibited, when telling Eric that she was acting out of fear of losing him, should not be discounted.

The Bold And The Beautiful Spoilers: Will Liam Confess His Infidelity To Hope? Vote Now! #BB #BoldandtheBeautiful https://t.co/cd06OKMvfP

The Bold And The Beautiful Spoilers – Marriage Counseling Or Divorce?

Divorce, at this point, would be the most dramatic decision Eric could make. It’s also fair to say that enough time hasn’t passed for that type of permanent choice to be made. The opportunity for Queric to attend marriage counseling sessions would reveal if healing is possible, rather than to decide it’s not, or to prevent it from occurring.

Buzz indicates that Eric might betray Quinn’s trust with Shauna, or another lady. So maybe that will be his form of a decision? Fans will soon see if this recently solid couple survives, or ends.