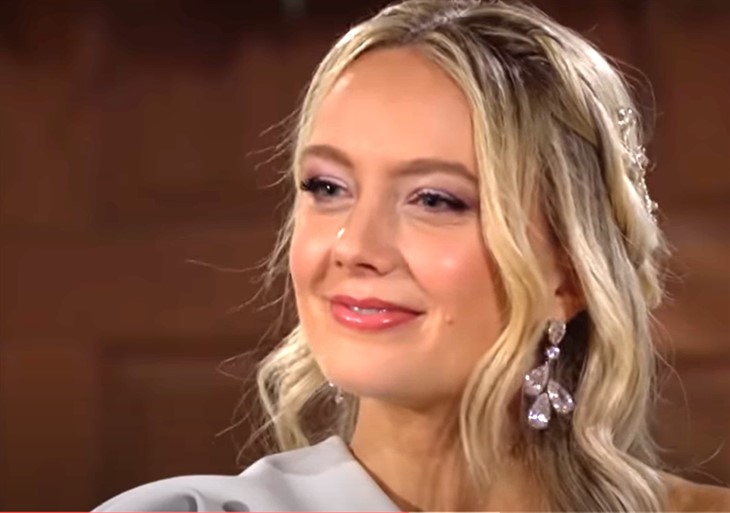 The Young and the Restless spoilers document that Abby Newman (Melissa Ordway) made an intriguing decision. She’s going to retain her Newman name, after marrying Chance Chancellor (currently being played by Ordway’s real-life husband, Justin Gaston). But Abby is also going to honor the other family units that she’s connected to.

So, Abby Newman will now become Abby Newman Abbott Chancellor. But part of her name lengthening discussion involved the Chancellor’s new living arrangements upon their return from the island honeymoon to Genoa City, Wisconsin. That led to the potentially disappointing news that Kevin Fisher (Greg Rikaart) and Chloe Mitchell (Elizabeth Hendrickson) are moving from the Chancellor Mansion, where Chance and Abby will be moving into.

The linked, last name dialogue is Y&R’s implied honoring of some of its legacy families. Abby pays respect to Victor Newman (Eric Braeden), along with Victoria Newman (Amelia Heinle) and Nick Newman (Joshua Morrow), as well as Ashley Abbott (Eileen Davidson) and the rest of the Abbott family, along with Chance, who is connected to the eternal Katherine Chancellor (Jeanne Cooper).

The Young and The Restless Spoilers: Eyewitness Who Saw Billy In The Area Of The Shooting Paid Off By Victor?

Viewers saw a wonderfully scripted and delivered wedding ceremony at the mansion as part of this iconic soap opera’s milestone twelve-thousandth episode. So, it’s fully fitting that some of the greatest characters in the show’s history have recently been highlighted, either through existing persona’s performances, or with retrospective flashbacks for those who are no longer part of the cast or are in heaven.

Just because Chloe and Kevin will be leaving the mansion doesn’t necessarily mean that they are leaving GC. While Hendrickson and Rikaart are recurring players, their characters could be moving to a different part of town. That would allow one of Y&R’s most dynamic couples to still be visible.

If, however, Khloe will be leaving GC, then this pairing can always be written back in. Here’s hoping that both great actors retain their recurring contract status, as their presence is deeply valued.

The Young And The Restless Spoilers – Chabs Family Expands In 2021

There has been a lot of talk about family expansion before and after the Chabs wedding. Abby and Chance are discussing the names of their anticipated first-born daughter and son, though no pregnancy has been confirmed.

Here’s hoping that Y&R allows this feel-good couple to enjoy an extended honeymoon period, which includes coming news of Abby’s pregnancy. Twins would allow a baby girl and boy to be born simultaneously. But if not that, then eventual multiple children are eventually delivered.