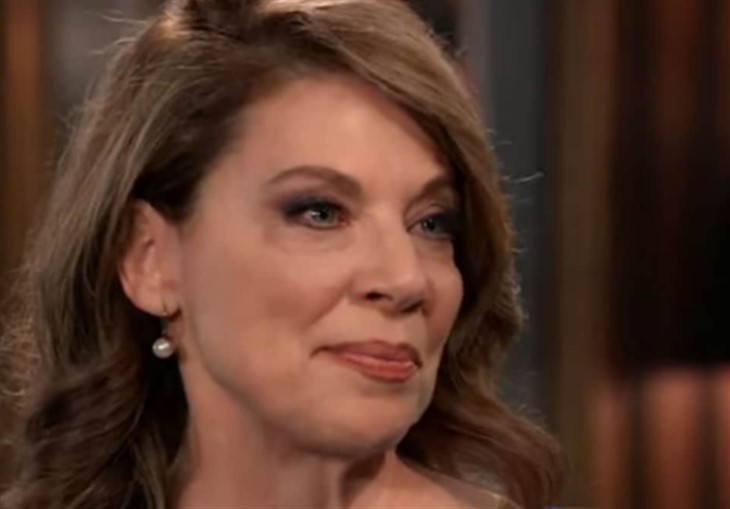 General Hospital spoilers and recap reveals in Port Charles, NY Britt Westbourne (Kelly Thiebaud) will soon discover she has gotten in over her head with new boss Cyrus Renault (Jeff Kober). Will Liesl risk her cover to save Britt from Cyrus and his drug ring?

General Hospital’s Jason Morgan (Steve Burton) warned Britt when she came to town and took this job that Cyrus was a drug runner. Britt seemed convinced that Cyrus was on the up and up to about his reasons for hiring her. However, this week Britt will discover how wrong she has been when Cyrus tries to enlist her in his drug-running schemes. With Jason Morgan (Steve Burton) out of town, Britt may turn to Nikolas Cassadine (Marcus Coloma) for assistance. Unfortunately, Cyrus just might require someone with a bit more experience in dealing with villains. Will her Muther need to come to the rescue?

General Hospital’s Cyrus isn’t close to the caliper of Caesar Faison (Anders Hove). Liesl worked side by side with her lover, Faison for years. Cyrus may think he can run roughshod over Britt but Liesl will wipe the floor with him. Cyrus believes Sonny Corinthos (Maurice Benard) and Laura Collins (Genie Frances) are his only issues when it comes to taking over everything in Port Charles. Liesl has been in The Hague for some time now and hasn’t been a threaten. However, that is about to change when Liesl finds out her daughter is in trouble. Liesl and Britt may not be seeing eye to eye right now, but she may welcome her mother’s assistance. Liesl is more than used to dealing with unreasonable men and Cyrus is about to meet his match.

General Hospital’s Britt would never admit to needing her mother’s help. However, if Liesl has truly been cleared of her charges, Britt could hire her mother to work at the hospital with her. Liesl is much more underhanded than Cyrus would expect and can find ways to deal with him that Britt hasn’t thought of. Britt may have learned from the best, but she isn’t the best, her mother is. Will Liesl come to Britt’s rescue after being dismissed from her life?

General Hospital’s Liesl was going to kill Dr. Kirk (Jamison Jones) when he threatened to expose Dante Falconeri’s (Dominic Zamprogna) brainwashing. Would Liesl risk exposure if Dante sees her in Port Charles? After all, Dante has been programmed to get rid of both Anna Devane (Finola Hughes) and Peter August (Wes Ramsey). Is saving Britt worth risking her freedom? Will Liesl be the person who takes Cyrus down?