Days Of Our Lives Spoilers Next Week: Philip Pays For Sarah’s Lips, Chloe Is Xander’s Date At Christmas Party! 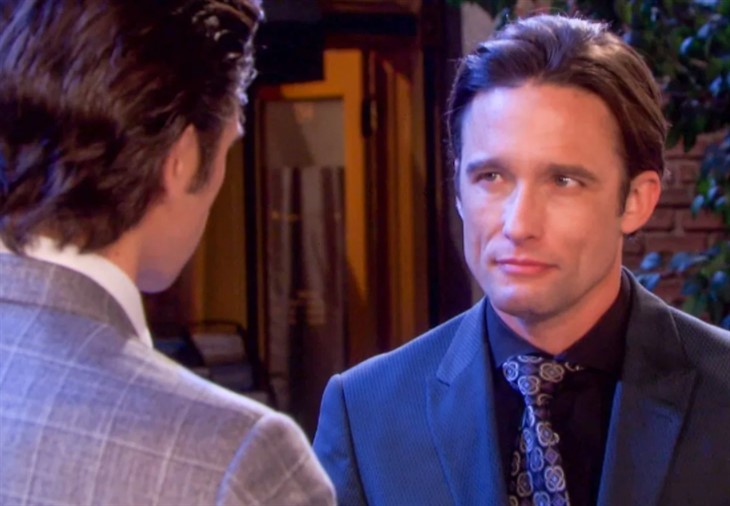 Days of Our Lives spoilers for the week of December 21 reveal that in Salem Philip Kiriakis (Jay Kenneth Johnson) pays the price for kissing Sarah Horton (Linsey Godfrey). Xander Cook Kiriakis (Paul Telfer) gets sweet revenge by bringing a special date to the Christmas party. It turns out to be Philip’s love interest, Chloe Lane (Nadia Bjorlin)!

Days Of Our Lives Spoilers – ‘Xarah’ Make Up A Break-Up

DOOL spoilers reveal that Philip is good at covering his tracks. He doesn’t leave a paper trail unless it can be explained without triggering suspicion. Eventually, Sarah wanted to get in on the action and learn the truth. However, Philip wouldn’t share anything because she was close to “the enemy.” So, the couple faked an explosive fight and separated. She even claimed to hate Xander, but she’s not giving Philip enough credit. He’s too smart to fall for that. Plus, all of her prying, spying and nosy questions are red flags. His instinct was right and he saw “Xarah” together.

Days Of Our Lives Spoilers: Eli And Lani’s Labor Of Love, Childbirth Crisis Brings ‘Elani’ Back Together?

Philip pretended to accept Sarah’s explanation of meeting Xander, but he knows what’s going on. It’s just like him to cross lines just a tad to test a theory. He did exactly that by unexpectedly kissing Sarah. Her reaction to the kiss spoke volumes to Philip. Now, he’s definitely not going to be telling anything to Sarah or leaving his laptop lying around anymore.

Days of Our Lives spoilers reveal that Sarah will tell Xander about the kiss. Now, that’s a risky move because the semi-reformed villain is a hothead. He has trouble controlling his temper, especially when it comes to the woman he loves. It seems that Sarah is able to stop Xander from blowing up their plan. In two weeks, there will be a Christmas party at the Kiriakis mansion. Xander uses the gathering to get under Philip’s skin, as well as deliver a dose of his own medicine.

Xander brings a date to the holiday party, who just happens to be Chloe Lane. Philip is absolutely livid and considers it crossing the line. He used Sarah multiple times, but he justifies it. Now to have the situation reversed is unacceptable to Philip because Chloe is part of his personal life.

Any time something private is used, it makes one more vulnerable. Plus, he worries about his former flame getting hurt. Reformed or not, he knows the things that Xander has done in the past. So, what is Philip going to do about Xander involving Chloe? Will he tell his former flame the truth about what’s going on? Will she end up in the crossfire when Ava Vitali (Tamara Braun) runs out of patience?