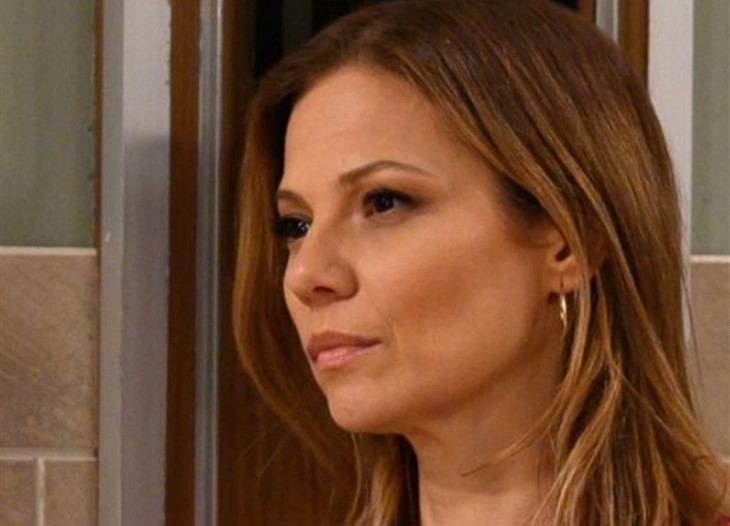 General Hospital (GH) spoilers tease that in Port Charles, NY Julian Jerome (William DeVry) got quite a shock when he visited Kim Nero (Tamara Braun). Kim wasn’t home but when a young woman answered the door, she soon revealed that she was Kim’s nanny!

It seems that Kim was pregnant when she left Port Charles last year. During a phone call with Kim, the nanny said that the baby belonged to Julian. But is that the truth? Kim may have lied about the baby’s paternity to prevent the baby’s real father from finding out that he is a father. The truth is, it’s quite likely that Franco Baldwin (Roger Howarth) is the true father.

Viewers may recall that last year, Franco had Drew Cain’s (Billy Miller) memories implanted in his brain. He believed he was Drew for several months before the procedure was done to reverse the procedure. But during that time, Franco slept with Kim Nero, with whom Drew had been in love.

Kim, for her part, tried to rebuff Franco as Drew’s advances at first. But the more they were around each other, the more Kim started to believe that he was basically Drew. They consummated their relationship and so it’s quite possible that Franco is the baby’s dad.

With Tamara Braun now on Days of Our Lives, the likelihood of her coming to General Hospital in the near future is practically nil. GH could recast the role but there is another option as well. What if something happened to Kim, perhaps trying to save Julian from Sonny Corinthos (Maurice Bernard) or Cyrus Renault (Jeff Kober).

If does die, perhaps she has left information that the baby belongs to Franco, and not Julian. The news would likely shock both Franco and his wife, Elizabeth Webber (Rebecca Herbst).

General Hospital Spoilers: Sam Realizes Mistake After Jason Falls For Britt – Too Late To Get Hubby Back? #GH #GeneralHospitalhttps://t.co/wO8LgLtVmV

While Franco would likely be thrilled, and a bit terrified to have a child of his own, Liz may not feel the same way. Liz is already raising three boys of her own with Franco, and they have had many monetary troubles as it is. Raising yet another son would strain their budget even further. And add to the fact that the baby would be a constant reminder that Franco slept with, even though he wasn’t in his right mind at the time. She may not want to raise this baby if Kim is no longer in the picture!

Is Kim’s baby Franco or Julian’s? Is Kim going to die? Could Franco and Liz end up raising yet another son? Anything can happen in Port Charles, so stay tuned to General Hospital airs weekdays on ABC. And don’t forget to check back right here regularly for all your General Hospital news, information, and spoilers!