General Hospital Spoilers: Anna and Finn Elope To Get Out Of Double Wedding? 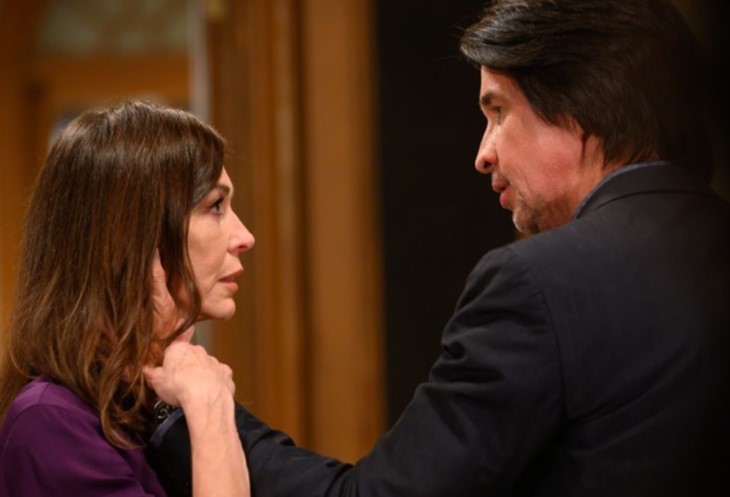 General Hospital (GH) spoilers tease that in Port Charles, NY Anna Devane (Finola Hughes) and Dr. Hamilton Finn (Michael Easton) have spent much time preparing for their upcoming wedding. Finn and Anna want their own day to celebrate and not have to share it with the other couple about to get hitched, Peter August (Wes Ramsey) and Maxie Jones (Kirsten Storms). Maxie has suddenly decided that a double ceremony is a perfect solution since both couples are marrying in the very near future. But Anna and Finn don’t want to share the spotlight or make the wedding an even bigger spectacle.

General Hospital Spoilers – Maxie Jones Wants To Be Married Before The Baby Comes!

The explosion at the Floating Rib has convinced Maxie that she needs to get married sooner rather than later. Her best friend, Lulu Falconeri (Emme Rylan) has so badly hurt that she has been shipped out of town to a long-term care facility in the hopes she will recover from her brain injuries. But with Lulu suddenly not around, Maxie is realizing that she needs to make the most of every day, even if that means encroaching on Finn and Anna’s big day.

GH Spoilers – Could Anna DeVane And Hamilton Finn Elope Before The Ceremony?

Finn is also recovering from being shot, so they are also rethinking what is important. While they thought they wanted a big ceremony in front of all their friends and family, they may just decide to elope before the big day. Anna and Finn might just decide to quietly recite their vows to each other, with perhaps just Violet Finn (Jophielle Love) or Harrison Chase (Josh Swickard) will be there to witness their affirmation of love.

General Hospital Spoilers – Avoiding The Drama Of A Big Wedding

Maxie seems to do everything big. The wedding ceremony will most certainly be a huge event, and like it or not, Maxie is not a calming influence. She is the exact opposite, and she and Peter will most certainly enjoy they’re larger than life ceremony (assuming they make it to the alter). But Anna and Finn would seem to be happier just witnessing the madness while having already affirmed their love for one another.

General Hospital Spoilers: 3 Reasons Why Carly And Jason Will Have A One Night Standhttps://t.co/OaQ6EFqjCL

Will Anna and Finn forfeit their big wedding for a quiet elopement? Will Maxie and Peter’s big wedding actually take place? Or will Peter’s crimes finally catch up to him? It’s all about the love in Port Charles, so stay tuned to General Hospital airs weekdays on ABC. And don’t forget to check back here regularly for all your General Hospital news, information, and spoilers!