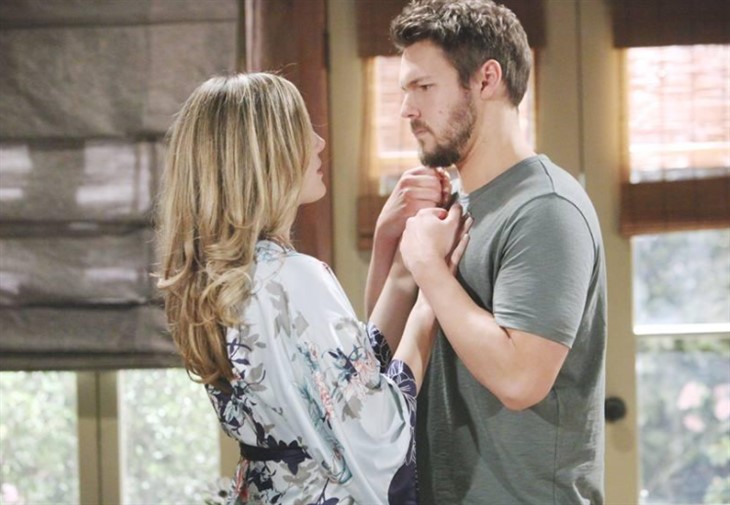 Liam has been filled with guilt over his drunken one night stand with Steffy Forrester (Jacqueline Macinnes Wood)! Through many conversations with her since, he has realized that he needs to learn not to jump to conclusions! Liam has always been one to leap before he looks, and fire before he aims! He was certain the Hope mannequin he witnessed as shirtless Thomas Forrester (Matthew Atkinson) kissing and fondling was his wife Hope, and that she was kissing and fondling Thomas back!

Of course, that doesn’t speak very well of Liam’s trust of Hope either, and that alone could tear down their marriage! If a couple doesn’t trust each other that is usually certain death for the relationship. If Liam knows what’s good for him – and his marriage – he will keep his mouth shut about the one nightstand! However, he will vow to himself to be the husband that Hope deserves, and he will intend to keep his promise.

But, there’s one little thing – sometimes things like that backfire and it could blow up in his face! He may try too hard, and his overcompensation may actually have the opposite effect and make Hope suspicious that he’s up to something! Liam can cover, however by making it about his laying into her about fooling around with Thomas when he didn’t realize it was the mannequin he saw that night!

Undoubtedly, Liam will try hard – perhaps too hard – to make things right without Hope becoming suspicious. It is a very fine line Liam is walking, trying to better himself when he’s full of guilt inside and hiding a sordid secret! He needs to temper his actions with care, being sure not to come off too strong when he bends over backwards to please Hope. Perhaps Hope will pick up on exactly that and still not figuring that Liam has done anything wrong other than overreact will tell him he’s trying too hard and she knows it was a confusing night!

That will serve to make Liam only feel worse – and still more guilty inside. Hope may tell him to forgive himself and move on, and that would be spot-on advice. But he will still feel the need to confess the sin with Steffy to assuage his guilt! The kinder and more understanding Hope is to him, the dirtier he will feel! Liam won’t be sure what to do – maybe he needs to confess to someone else, someone who will protect his secret. He doesn’t want to lay any more on Steffy, and besides, that would just be the blind leading the blind!

The Bold And The Beautiful Spoilers: Thursday, December 17 – Paris Busts Zende & Zoe – Ridge Thanks Hope For Standing By Thomashttps://t.co/d439hPaOK5

Perhaps he will decide to confess to his brother Wyatt Spencer (Darin Brooks) but that would mean confessing he thought a mannequin was Hope! That wounds his pride, and embarrasses him! Confessing to his father, Bill Spencer (Don Diamont) wouldn’t be any easier but at least he knows Bill wouldn’t judge him – he’s done the same if not worse!