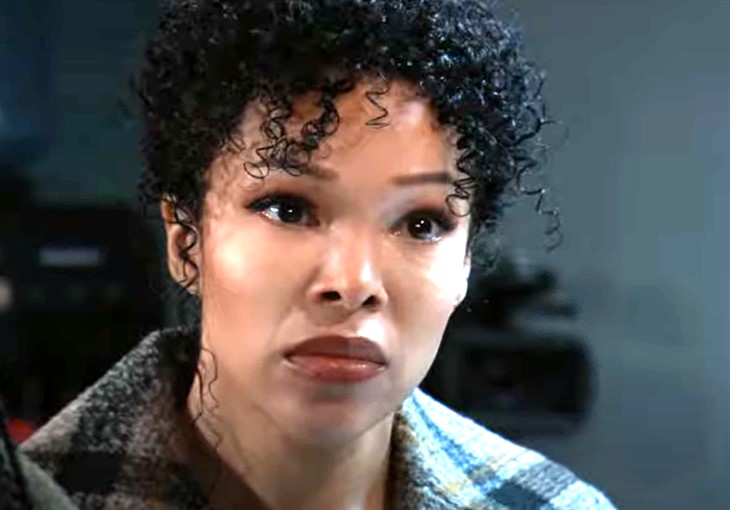 General Hospital (GH) spoilers tease that in Port Charles, NY Portia Robinson (Brooke Kerr) has just about had it with Cyrus Renault (Jeff Kober). It’s bad enough that he is constantly in her face at General Hospital as Chairman of the Board. But once she finds out that Cyrus approached her daughter, Trina Robinson (Sydney Mikayla), and told her that he believes Marcus Taggert (Real Andrews) is still alive. Trina wanted to believe her father is alive so badly, that she has enlisted her friends to help her find him.

This is exactly what Cyrus is hoping for. If Taggert is alive, Cyrus will make it his mission to find him and kill him for real. That’s why he told Trina, so she could find Taggert for him and lead him to his enemy. Trina has no idea that she could be in real danger, especially if she finds Taggert. Once Portia gets wind of Cyrus’s interference, she’ll immediately realize that Cyrus is once again involving himself in her family, and although she doesn’t know Taggert faked his death, she may begin to correctly suspect that Taggert did indeed fake his death.

As viewers know, the reason Taggert faked his death in the first place was because Cyrus had Trina kidnapped in order to draw Taggert out of hiding. He would have had Trina killed as well if she hadn’t been rescued in the nick of time. Portia will know nothing will keep Cyrus from killing Taggert if he is alive, and won’t care if Trina is caught in the crossfire. This will bring out a protective side of Portia that Cyrus may be unprepared for.

General Hospital Spoilers: Boy Or Girl? Peter And Maxie Find Out The Sex Of Their Unborn Child #GH #GeneralHospital https://t.co/huXXTRSUnq

But Portia doesn’t know any of this yet, but just the fact that Cyrus put ideas in Trina’s head will be enough to issue a threat to the drug lord. She may have to work for the man, but if he thinks he can continue interfering with Trina, she will make it her mission to stop Cyrus. It’s well within the possibility that she could even issue a death threat against Cyrus. This would be a mistake because Cyrus will not hesitate to strike back. And of course if Cyrus does turn up dead in the near future it would put Portia right at the top of the suspect list.

Will Portia make a threat against Cyrus that lands her in hot water? Will Trina give up the search for her father? Or will Taggert reveal himself to them sooner rather than later? Exciting times are coming up in Port Charles so stay tuned to General Hospital airing weekdays on ABC. And don’t forget to check back here regularly for all your General Hospital news, information, and spoilers!