The Young and The Restless Spoilers: Amanda Finds Shocking Info About Her Mother, Devon Offers Support 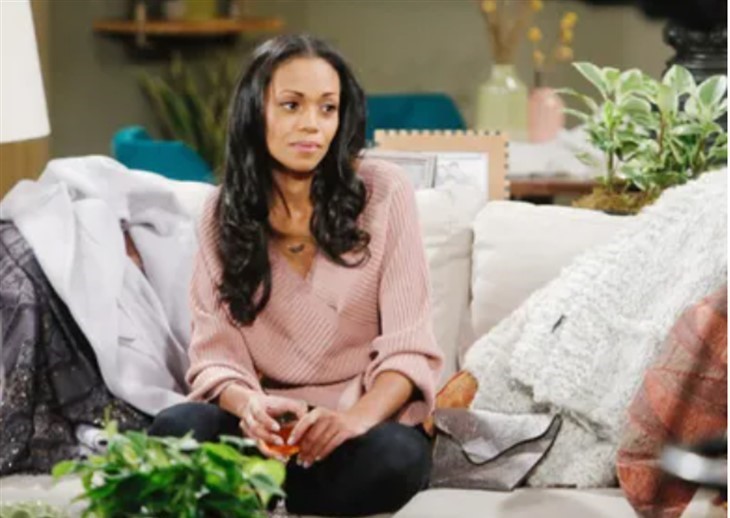 The Young and The Restless spoilers tease that in Genoa City, Wisconsin Amanda Sinclair (Mishael Morgan) will meet up with Devon Hamilton (Bryton James) on an upcoming episode of The Young and The Restless. She will share the details that her private investigator uncovered while searching for Amanda and Hilary Hamilton’s (Mishael Morgan) birth mother.

Amanda tells Devon her private detective finally hit pay dirt in the search for her and Hilary’s birth mother. Her name is Naya Benedict (Ptosha Storey) and she was actually Ann Turner’s (Leslie Stevens) cousin! So Hilary’s adoptive mother was actually her aunt, and of course, that would make her Amanda’s aunt as well. Devon will likely be shocked but interested in this new development.

Hilary had never mentioned any actual family connections to Ann, who had adopted her, but it seems like Ann and Naya decided to keep things all in the family where the adoption of Hilary was concerned. But that leaves Amanda still struggling to understand why Ann took Hilary, but not her, and why she spent her childhood years growing up in orphanages and foster homes. Amanda cannot figure out why someone would not want one baby and not her twin, since they as identical twins would have been exactly alike!

Amanda still feels abandoned by Naya, and wonders if Ann even knew about her. She is feeling frustration and pain over this so she tells Devon at least for right now, she has no desire to look for Naya any further. At that point, Devon will understand why she wouldn’t want to look for Naya but might point out that there is still bound to be more to the story and only Naya could clear things up.

Devon won’t argue with Amanda, since Amanda will tell him that she got to the point in her life where she could let it go. She didn’t need the support of her parents to become a success and the woman she wanted to be. She certainly doesn’t want to go back to becoming her inner child who thought she needed a mom to come and save her! He does say that there could be extenuating circumstances – maybe Rose could not afford to raise two children, and Naya couldn’t even afford to raise one.

Amanda reiterates she wants to remain strong and independent and searching further for the mother that abandoned her will only remind her of that weak, scared inner child. Devon lets it go. Amanda, full of questions but determined not to live in her insecure past, returns to her suite. But then, she gets a text from her private detective, who has not discontinued his or her search. The text reveals Naya Benedict lives only about an hour away from Genoa City! Amanda figured either Naya would be dead, like Ann Turner, or she would be so far away that she would have to take extensive time away from her job.

Part of that job is defending Billy Abbott (Jason Thompson) and gathering evidence of him being framed, so that much time away would not work – at least now! But since it’s only an hour’s drive she changes her mind about meeting Naya and hearing her side of the story and calls Devon with the news. Devon will likely go with her to meet Naya for support if she will let him! However, if it’s anything like the rest of her life has been, this will likely be another roller coaster that she won’t be able to get off of soon!