The Young and The Restless Spoilers: Jordan Steers Faith Into More Trouble, Encourages Her To Steal Booze 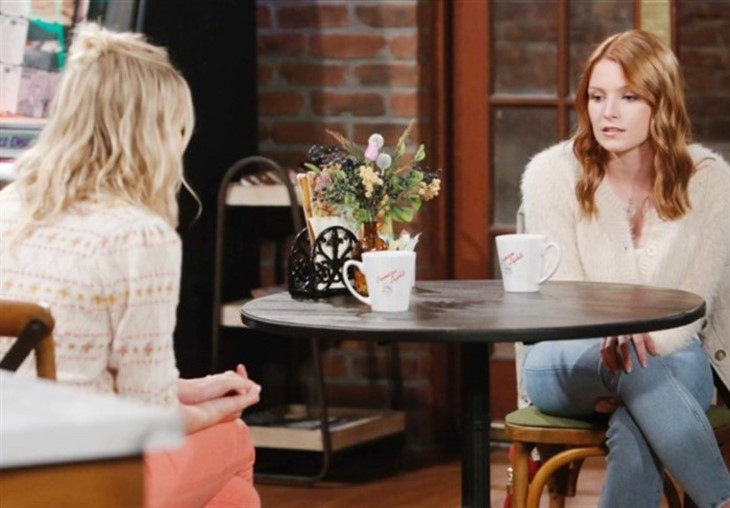 Most teenage girls Faith’s age do go through a rebellious stage, but this seems to be more than just normal teenage rebellion. Faith is turning into quite a handful for her parents, Nick and Sharon Newman (Joshua Morrow, Sharon Case). However, if she stays on the path she is on, with the influence of her “friend” Jordan, she may be interacting with her future stepfather Detective Rey Rosales (Jordi Vilasuso) on more of a professional basis! Bullying over being the niece of Adam Newman (Mark Grossman) and the baby switch involving her being made public has taught Faith that some friends aren’t friends.

Her soon to be aunt Lola Rosales (Sasha Calle) saw her crying in a recent episode, and took her aside to talk to her. Lola and others in her family have tried to drive home the point that friends who turn on her weren’t really friends to begin with. There are levels of friendship – acquaintance, socializing friends, social media friends, and friends who are like family. The friends who are like family are most likely one’s true friends – friends who care! Jordan is mainly an acquaintance – and probably stringing Faith along so she can get her in real trouble and then laugh about it behind her back with her mean girlfriends!

Y&R Spoilers – Newman Faith Is So Desperate For Acceptance, She’ll Do Anything!

Poor Faith is so desperate for acceptance, she’ll do anything! Jordan knows that, and she’s taking advantage of it. Longtime viewers of The Young and The Restless will recall that Faith’s grandmother, Nikki Newman (Melody Thomas Scott) is an alcoholic. Faith’s father, Nick reminded her of that fact and also that her older sister Cassie Newman (Camryn Grimes) had died in an alcohol-related accident.

Cassie, who really wasn’t old enough to drive, had attempted to drive a drunk Danny Romalotti (Michael Graziadei) home and crashed the car, and had died from her injuries. Cassie too was a sweet girl who hung out with the popular kids to be accepted, in this case, older than her. They laughed among themselves at her trying to act older to fit in. Cassie too became rebellious over wanting to fit in and now Faith seems to be repeating parts of her history! But at least those older teens, among them Lily Winters (Christel Khalil) and Devon Hamilton (Bryton James) didn’t try to get Cassie into trouble like Jordan is Faith, and Danny, although he drank, didn’t try to get Cassie into drinking.

But Jordan is a whole different person than Lily and Devon as teenagers; Jordan is in trouble herself and tries to get Faith into trouble. Viewers will recall her taking Faith to a pool party where it was implied that the partiers did a lot more than swim and wore a lot less than swimsuits! Faith, embarrassed, left and went home but Jordan kept texting her for meet-ups – secret meetups! This time, Jordan will meet up with Faith or possibly take her to Society, where she dares Faith to steal a bottle of vodka from the bar and stick it in her purse while Jordan distracts the bartender and Lola!