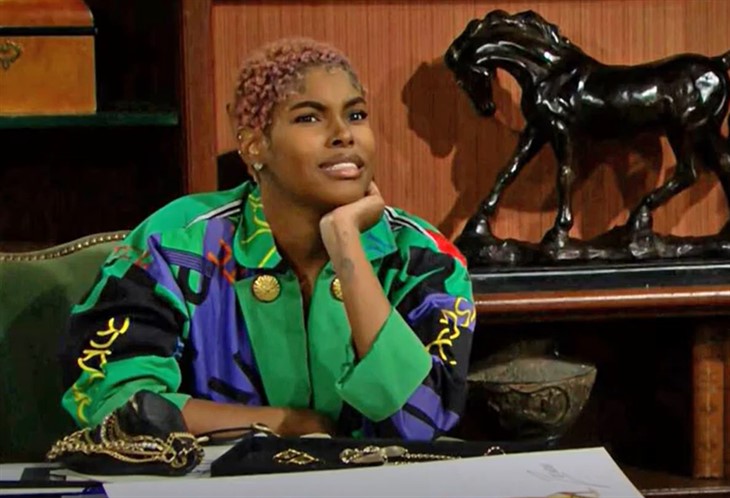 The Bold and the Beautiful spoilers reveal that Paris Buckingham (Diamond White) gets invited to an intimate Forrester holiday event. It usually only includes family and close friends. Zoe Buckingham (Kiara Barnes) is irked beyond belief when her sister already has an invite. Is Paris really trying to take over Zoe’s life or is she blowing things out of proportion?

The Bold And The Beautiful Spoilers – Forrester Christmas Party

B&B spoilers reveal that the Forrester Christmas party is coming up during the week of December 21. It is an annual event, but an intimate one. It’s not easy to get an invite, but Zoe was able to go last year. Once again, she will be invited to attend, but is surprised when she sees an unexpected face among the guests.

Zoe is shocked to see Carter Walton (Lawrence Saint-Victor) bringing Paris to the Forrester Christmas party. She is immediately heartbroken but doesn’t have all of the facts. It wasn’t Carter that invited Paris, it was Zende Forrester (Delon de Metz). She is still deeply hurt, but the person causing the pain is just different. She thought that she had a special connection with Zende, so him bringing Paris to the party is like a dagger in her heart.

The Bold And The Beautiful Spoilers – Zoe Buckingham’s Perspective

The Bold and the Beautiful spoilers reveal that in Zoe’s mind, she fears that Paris is going to destroy all the hard work she’s done the past several months. Actress Kiara Barnes told Soap Opera Digest,

“… Zoe feels like Paris is invading her life. Last year, Zoe was invited to the Forresters’ for Christmas, which is a really intimate event, and now her sister just shows up like she’s part of the family? Zoe is annoyed, but when she finds out Zende invited her, that’s a real sting. Zoe thought she and Zende had a special connection and now he’s pursuing her sister? That is irritating beyond belief.”

Even though Paris is playing the part of the innocent younger sister, everyone has two sides. Her unexpected visit, always hanging around Forrester Creations, immediately going after Zende and now she just happens to be invited to an intimate Forrester gathering. Even all the modest brush offs when Zende mentions modeling or fashion could all just be part of her plan.

There is a reason why the sisters haven’t spoken in so many years and why Paris was never mentioned. There is a reason why Paris is suddenly inserting herself into Zoe’s life. The model might be seen by others as overreacting, but she knows Paris the best and probably already knows what she is doing. The question is, what is Paris’ ultimate goal and how will Zoe preserve what she already has?