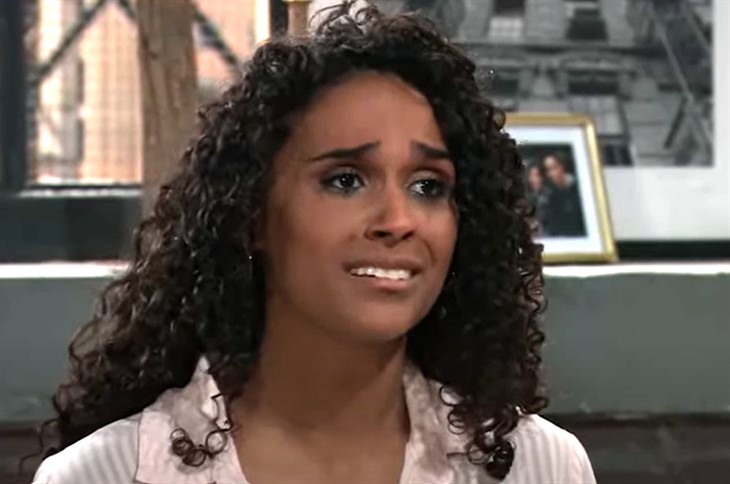 ABC General Hospital spoilers tease that in Port Charles, NY Jordan Ashford (Briana Nicole Henry) is in the weeds with just about everyone in Port Charles, NY. She’s the police commish but also in the back pocket of mob boss Cyrus “Cy” Renault (Jeff Kober) and now she’s in deep doo with her husband whom she lied to.

Curtis Ashford (Donnell Turner) just found out that Jordan has been keeping a whopper from him, and by the looks of it the lie has done serious damage to their marriage.

On a tremendous Friday Cliffhanger epi, Curtis straight-up walked out on his wife. What happens if he can’t forgive and forget? And what happens if she’s pregnant?

General Hospital spoilers – Jordan Ashford Has Some Explaining To Do

Pretty much there is nothing more for Jordan to lose now that the whole town knows that Marcus Taggert (Real Andrews) is alive, not dead. And wouldn’t you know it, his loved ones’ glee quickly turned to anger when they realized they’d been tricked. So basically Marcus and Jordan are on the outside looking in while the pieces of their deception fall where they may. It’s always been clear that Marcus had a thing for Jordan and that his ex Portia Robinson (Brooke Kerr) had a thing for Curtis.

There will be a tremendous amount of fallout from Taggert’s reemergence not the least of which is the problem it creates for Jordan and Curtis. He seems hurt and destroyed that his wife lied to him about putting Marcus in the Witness Protection Program but explosive show spoilers reveal that Jordan may have an even bigger reason going forward to lie once again.

Is Jordan about to find out that she’s pregnant? If she is the timing is conflictual due to what is going on between her and Curtis. Jordan is a good liar it’s part of her skill set. Would she lie to Curtis about him becoming a father given the state of their relationship?

General Hospital Spoilers – What happens Next In Port Charles, NY?

Maybe Jordan doesn’t want to bring a child into their marriage the way things are between them right now. Or maybe she would lie and say she betrayed Curtis with someone else? Either way, it seems like the perfect awkward time for Jordan to find out she and Curtis are about to come parents, just as they face the toughest hurdle in their relationship to date.