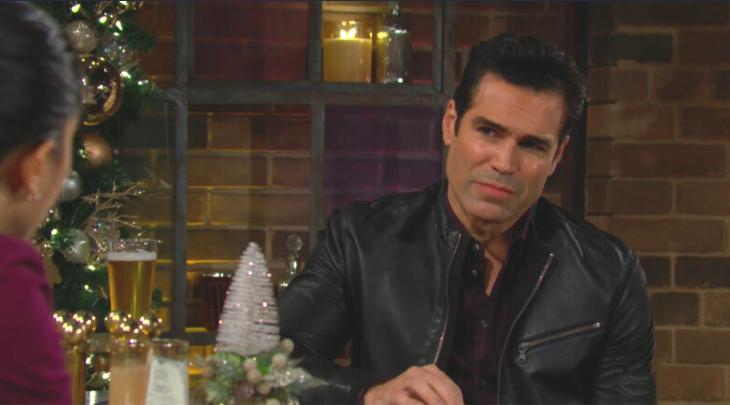 Rey confides in Lola that while he trusts his fiancée Sharon Newman (Sharon Case), there is still a wound in his heart from his ex-wife, Mia Rosales (Noemi Gonzalez). Viewers of The Young and The Restless will recall that Mia had an affair with Rey and Lola’s brother, Arturo Rosales (Jason Canela), and became pregnant with Arturo’s baby. This wound, caused by Mia and Arturo through their double betrayal is causing Rey to get a slight case of cold feet!

He tells Lola that in his mind, his rational self knows that Sharon would never betray him as Mia did, but his heart is still a little scared to move forward with the wedding. This is the same wound that has caused problems between Rey and Sharon before when Rey was jealous over Sharon’s continued relationship with her ex, Adam Newman (Mark Grossman).

Even though Sharon was being a platonic friend to Adam as well as a therapist, Rey’s jealousy and mistrust from the past because of Arturo and Mia’s betrayal would spring up to the surface. After all, this was his wife cheating with his own brother, and that is a very difficult thing to move past emotionally! Lola is kind and understanding but tells Rey he has to just put it in the past and not ruin his wedding to Sharon. They are to be married on New Year’s Eve.

The Young and The Restless Spoilers: Jordan Steers Faith Into More Trouble, Encourages Her To Steal Booze

However, there is one huge reminder of Arturo and Mia’s betrayal that could ruin Rey and Sharon’s wedding. That’s Arturo himself! Viewers of The Young and The Restless will recall that Arturo showed up at Lola’s wedding to Kyle Abbott, (Michael Mealor) as well as their mother, Celeste Rosales (Eva LaRue). Their father, Adrian Rosales (Jay Montalvo) also showed up uninvited. Rey and Arturo were kept busy trying to keep Adrian from ruining the wedding!

The Young And The Restless (Y&R) Spoilers: Jason Canela Says He’s Always There For His Rosales Family #yr #YoungandRestlesshttps://t.co/TffpX6cXtA

Celeste also will be coming to Rey and Sharon’s wedding, and that won’t be a problem but it looks like Arturo is coming too. Arturo and Rey kept the peace between each other at Lola’s wedding, but Rey may have a hard time staying objective seeing Arturo at his own wedding! When Lola married Kyle, Mia remained at home in Florida because she was pregnant with Matteo Rosales (uncast character) who was born two months after the wedding. Rey tells Lola Arturo is coming, and of his fears that his pain over the betrayal will rise up during the wedding. It is news to Lola – possibly their mother invited him.

Neither knows if Mia and Matteo will come with Arturo, but Lola tries to encourage Rey that they want to move on and leave the pain in the past as well. She spent time with all of them when she was trying to get her restaurant open and established during the summer. If Rey can remain objective and look forward to the future instead of being reminded of the pain of the past, there should be no problems and no cold feet!