Eastenders Spoilers: Linda Taunts Mick, Will He Finally React And Blurt Out The Truth? 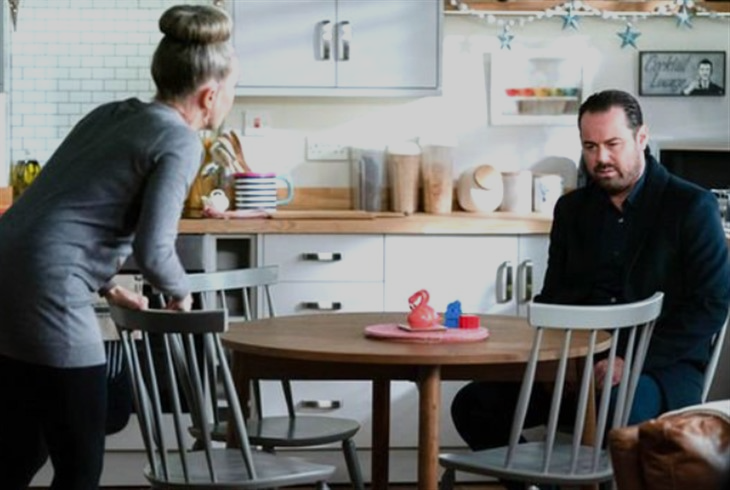 Eastenders spoilers reveal that in Walford Mick Carter (Danny Dyer) continues struggling with his childhood sexual abuse by himself. His family has no idea what happened or what he is currently going through. Linda Carter (Kellie Bright) continues being pushed away by her husband, which has her taunt him with a bottle of whiskey. Will he finally react and let it all out?

For the past few months, Mick has been forced to remember, acknowledge, and face his childhood trauma. However, Katy Lewis’ (Simone Labhib) has been gaslighting and manipulating her victim. She has convinced him that nothing happened and his memories are just a boy’s childhood fantasy. This has sent him reeling psychologically and she’s taking full advantage by driving a further wedge in his relationships.

Eastenders spoilers reveal that Mick is alienating Shirley Carter (Linda Henry) and Tina Carter (Luisa Bradshaw-White). In addition, he is also pushing away and shutting out his wife. It is sending her into the arms of Max Branning (Jake Wood). In fact, when the two end up having a night of passion, Mick is heartbroken seeing where — and to who — his wife runs to.

On Thursday night’s episode, we will see Linda feel guilty about betraying her marriage. She will try to make things right and reach out to Mick. She explains how he has been making her feel and why she’s being pushed away. However, he says nothing and does nothing. This frustrates Linda to the core and she decides to force him to react by taunting him with a bottle of whiskey. But will it have any effect or is his trauma too paralyzing for him to react to anything at this point?

Reaching Out For Help

We know that Mick doesn’t end up blurting out the truth to Linda or any other family member, at least not yet. On New Year’s Eve, Mick crumbles even further and considers killing himself. He ends up making a life-saving phone call to The Samaritans. Will he be able to talk to them about what is really going on? Will they connect him with an organization that can help and will his loved ones finally learn what is really going on?

At some point, this story is going to resolve and come to an end. But will there be too much damage by the time that happens? Not only is Shirley shaking up with wife-killer Gray Atkins (Toby-Alexander Smith), but Tina is the prime suspect in Ian Beale’s (Adam Woodyatt) attack. Plus, Linda is reaching the point of no return. Or could the Carter family actually have a happy ending? We will have to keep watching the BBC soap to see how this story develops over the next few weeks.