Eastenders Spoilers: Katy Gets Even Worse, Drastic Action To Stop Mick’s Abuse From Coming Out 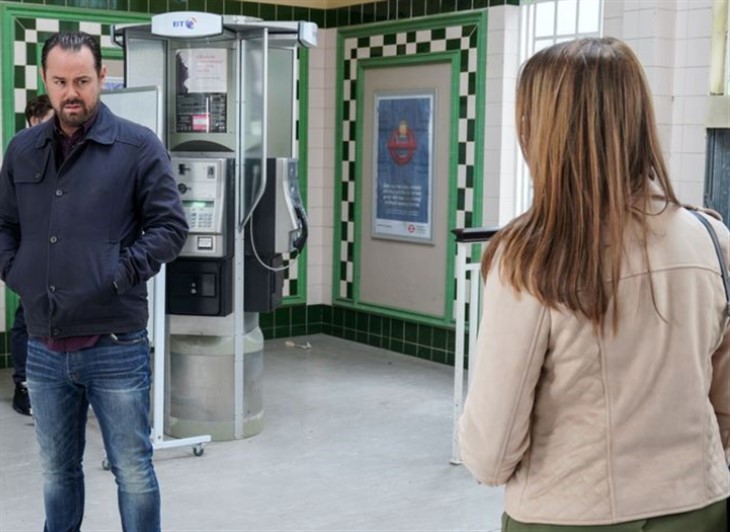 Eastenders spoilers reveal that in Walford Katy Lewis (Simone Lahbib) will get even worse leading up to the explosive conclusion of Mick Carter’s (Danny Dyer) abuse storyline. He has confronted her before, but this time, she won’t be able to tell him the abuse didn’t happen. However, be prepared for her to get even worse as she takes extreme measures to keep the abuse a secret.

Mick had put the memories of being sexually abused as a boy in the back of his mind. He didn’t think about it again until Frankie Lewis (Rose Ayling-Ellis) admitted why she was stalking Mick’s family. When she told him that he might be her father, Mick was in shock. That’s when the memories really started coming back. Even though Frankie did the math and realized Mick was just 12 or 13 when she was conceived, he denied the abuse. It wasn’t until later when Mick was forced to face what happened to him as a boy in the care home.

spoilers reveal that when Katy first came to Walford, Mick confronted her. However, he didn’t bring up the abuse right away. Instead, he wanted to know why she never told him about Frankie. That’s when the abuser claimed Frankie was not his daughter and there was never any abuse. Since then, she has continued to gaslight and manipulate Mick, just like she did when he was in the care home.

Eastenders Spoilers: Linda Taunts Mick, Will He Finally React And Blurt Out The Truth?

As the year comes to a close, expect Mick to remember vivid and graphic details about sexual abuse. There is no way Katy can trick him into believing it didn’t happen, not anymore. He will confront the abuser but be prepared for Katy to get much worse.

Executive producer Jon Sen talked to Metro about what to expect from Katy leading up to New Year’s Eve.

“Simone is brilliant at playing Katy because you suddenly see in her eyes that there are levers of control she’s able to exploit so excellently. One of the most gripping things about it is depicting how an abuser is able to manipulate their victim as an adult, in similar ways to when they were groomed as a child. So when Mick really starts to find his footing with the memories from the past– Katy will of course do anything in her power to stop the truth from ever coming out.”

What do you think Katy Lewis is going to do when Mick Carter confronts her after having a vivid flashback? Just how far will she go to control her victim? What will happen with these characters when the truth finally comes out?