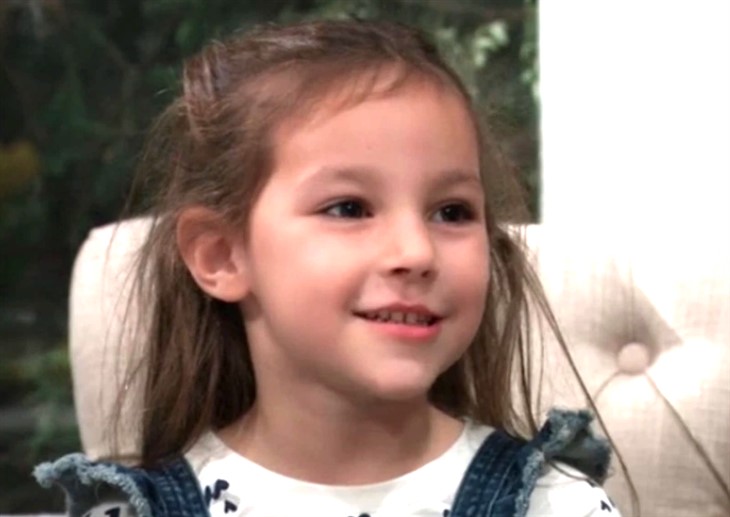 General Hospital (GH) spoilers tease that in Port Charles, NY at the moment, Carly Corinthos (Laura Wright) and Jasper “Jax” Jacks {Ingo Rademacher) have managed to keep Nina Reeves {Cynthia Watros) from discovering that Nelle Benson (Chloe Lanier) was her daughter. Nelle is dead now, so Carly and Jax don’t think there is anything to gain from Nina Learning the truth. But all, it will take, is one conversation with Avery Corinthos to change everything!

Perhaps one day when Avery is visiting her mother Ava Jerome (Maura West), Nina will stop by for a visit. If Avery sees the necklace she’ll likely think that Nina somehow has her necklace! As viewers know, Avery found Nelle’s half of the necklace in the woods, where Nelle eventually fell over a cliff while trying to get away from Carly. Nina won’t understand at first, but then it should dawn on her that Nelle was her daughter!

Once Nina finds out that Jax and Carly have kept the truth from her, she will most certainly go into offensive mode. The first thing she is most likely to do is to kick Jax to the curb for his deception. It won’t matter what his intentions were, he lied to her, just like Valentine Cassadine (James Patrick Stuart) did by having Sasha Gilmore (Sofia Mattsson) pretend to be Nina’s daughter. But it’s Carly who will likely face most of Nina’s wrath.

Although Carly didn’t cause Nelle’s fall, she did hesitate for a moment to lend a hand. While this is completely understandable given all the many tricks that Nelle has pulled, Nina may see this as Carly not acting in time to help Belle, She may even go to the police and have the investigation into Nelle’s death reopened. And that probably not all, Nina will likely file for some sort of custody of Wiley Corinthos (Erik and Theo Olsen). She won’t want Wiley to have any idea who his mother is. And if she can’t raise her daughter, Nina may decide she can raise her grandson, at least part-time. Nina will likely strike out in many different ways so Carly had better watch out!

Could Avery be the one who clues Nina into the truth> Will Nina dump Jax? And what will she have in store for Carly and possibly even Wiley? Only time will tell, so stay tuned to General Hospital airing weekdays on ABC. And don’t forget to check back right here for all your General Hospital news, information, and spoilers!