Days Of Our Lives Spoilers: Steve And John Team Up – Can They Find The Truth? 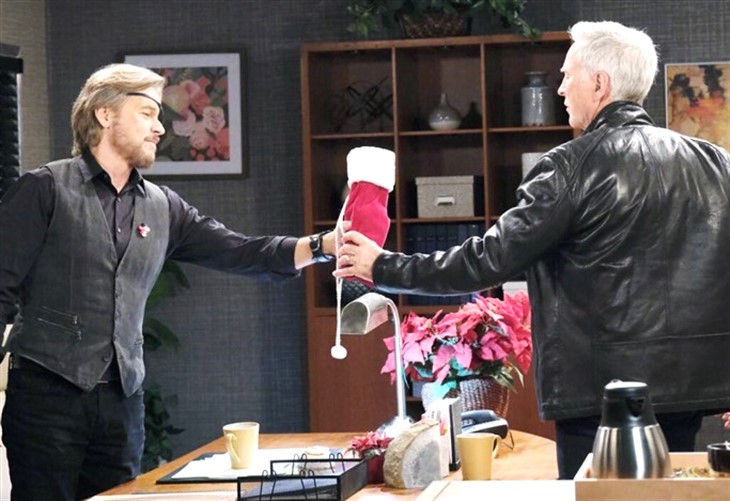 NBC Days of our Lives spoilers tease that in Salem when two old friends put their heads together in Salem they just might solve a very puzzling case that involves them both. John Black (Drake Hogestyn) and Patch Johnson (Stephen Nichols) have been friends forever but a recent turn of events have them on opposing sides. Allie Horton (Lindsay Arnold) has claimed that Tripp Dalton (Lucas Adams) raped her in London, resulting in the conception of her child, Henry Horton. Four, count ‘em four, DNA tests have come back as a match for Tripp who proclaims his innocence.

John believes Allie and wants justice for her, and Patch believes Tripp and wants the truth to come out. Could it be that together they find the truth that has eluded almost everyone?

DOOL Head Writer Ron Carlivati recently talked to Soap Opera Digest about this fascinating storyline and we have his comments for you right here. According to Ron, “Steve finally gets this idea – because he’s Steve and he’s smart –that what if some relative of Tripp’s came into Allie’s apartment after Tripp left?” He argues that if this is the case, it would explain the DNA results and put Tripp in the clear.

Days Of Our Lives (DOOL) Spoilers: Will Charlie Finish Killing His Mother, Or Keep Her Tied Up And Shut Up?

Of course, that is quite a fantastical story and John is understandably skeptical. He thinks it would be an incredible coincidence if this were the case and calls it far-fetched. And yet, as viewers know, this is exactly what happened. So if Kayla Johnson (Mary Beth Evans) is so smart, why didn’t she think of this? She is Tripp’s stepmom and the doctor who ran the test four times!

Days Of Our Lives Spoilers – What Happens Next In Salem For Tripp Dalton And His Family?

Despite his reservations, Steve manages to convince John and asks him, “Don’t you want to know who Allie’s attacker is if it’s not Tripp?” According to Carlivati, John buys into this logic, and the two team up determined to get to the bottom of the whole situation.

Now the question becomes, how will they discover that Charlie Dale (Mike C. Manning) is the person they are on to? At the moment he has his mom Ava Vitali (Tamara Braun) all tied up after she learned his secret. Will she be the one to spill the beans about who he is and what he did?