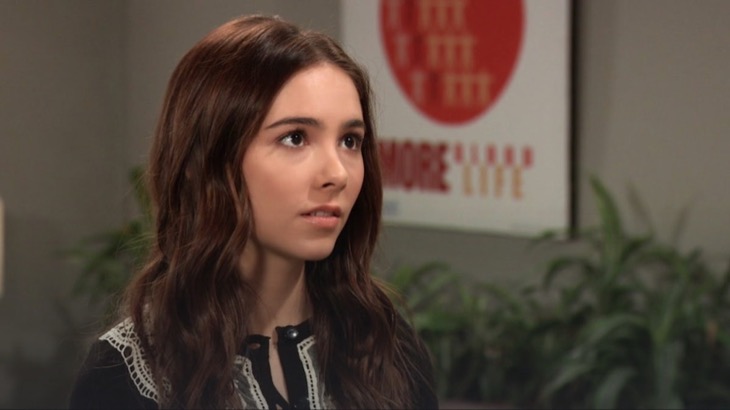 General Hospital’s spoilers and updates indicate that in Port Charles, NY Molly Lansing Davis (Haley Pullos) will follow through with her plan to come clean to T.J. Ashford (Tajh Bellows). However, Molly is taking a chance at losing who she considers being the love of her life by being honest. Will Molly’s attack of conscience cost her T.J.?

General Hospital’s Molly listened to T.J.’s mother when she told her that they were done. Jordan Ashford (Brianna Nicole Henry) knew that T.J. was missing but told Molly that T.J. wanted to break up. Molly was determined to find T.J. until Jordan told her this. Molly thought she was single and hooking up with Brando Corbin (Johnny Wactor) was her response. Molly had no idea that T.J. would be back. Molly was also very remorseful when T.J. returned. However, Molly chose to remain quiet so she didn’t upset T.J. Now she feels that is a mistake, but should she remain quiet?

Unless General Hospital’s Molly tells T.J. that his mother lied to her, T.J. may have a huge problem forgiving her. T.J. has no idea how upset Molly was at the time. T.J. also doesn’t realize that his newfound friend has slept with Molly. T.J. couldn’t help but realize that Molly didn’t seem comfortable around Brando but had no idea why. At least now Molly’s hesitation will make sense. However, there is no doubt that T.J. will feel betrayed by both Molly and Brando. Can T.J. forgive either of them for choosing to lie to him? Will Molly and T.J. be able to work their way past this or is this the end of their love story?

General Hospital’s T.J. can be forgiving, after all, Jordan lied to him about his father his whole life. T.J. moved out and wouldn’t speak to his mother. Eventually, T.J. chose to forgive Jordan and they moved past her lies. However, Jordan played a huge part in Molly and T.J.’s hookup. Jordan could have been honest with Molly but she refused. Jordan had T.J.’s phone and Molly had no reason to doubt Jordan’s words. Yes, Molly hookup with Brando very quickly but it was also based on lies. Will T.J. realize how much Jordan’s words hurt Molly? Will T.J. expect Molly to have known better than to believe he would just walk away?

General Hospital’s Molly and T.J. have been together for years. However, Molly’s one-night-stand, while he was facing death, maybe the one thing that T.J. simply cannot forgive.