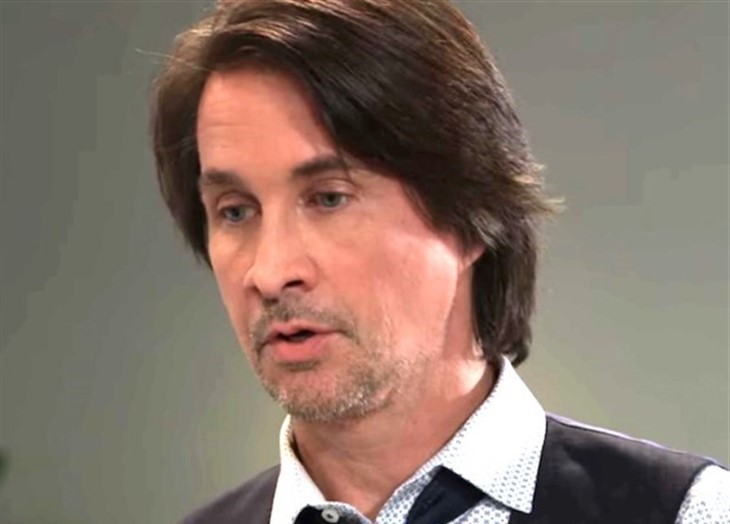 General Hospital spoilers tease that in Genoa City, Wisconsin Dr. Hamilton Finn (Michael Easton) will be remorseful over his one night stand with Jackie Templeton (Kim Delaney) in an upcoming episode of GH!

General Hospital viewers will recall that Finn confessed his secret to Anna Devane (Finola Hughes) after his father, Gregory Chase (Gregory Harrison) and brother Detective Harrison Chase (Josh Swickard) spent the day with them. Greg and Violet Finn (Jophielle Love) had a good time getting to know one another, and while Finn had extended an olive branch to Greg for Violet’s sake, Anna wondered where the years of vitriol had come from.

Greg had told Finn’s story of Finn being upset at his marriage to Jackie so soon after Finn’s mother had died, but Anna suspected there was more. Finn admitted that he had been involved with Jackie first, but Jackie was involved with his dad at the same time! When Finn wouldn’t commit, Jackie married Greg! Finn and Jackie hadn’t really been calling their relationship “dating” but they became involved in spite of themselves.

Then, at a point around a year later, Finn had gone to his father’s house to make amends for not going to the wedding and was greeted by Jackie with a baby in her arms! Of course, that was baby Chase. Anna immediately came to the suspicion that Chase is Finn’s son, not his younger brother, but Finn insisted Jackie told him the timing was off. Anna asked if any paternity test had been done, and Finn said no, he believed Jackie.

Even after all those years, Finn feels guilty about the one night stand with Jackie. He cannot help but wonder if the two of them reconnecting when she came to Port Charles has something to do with her and his dad’s divorce. Greg claimed that they just grew apart, what with all of her travel to cover stories, but Finn can’t help but wonder if he is to blame. When he compared notes with Chase, she had told Chase about the impending divorce right after she and Finn had talked things over. Greg didn’t say anything about it until now and this is several months after. The other reason he is remorseful is even though he is choosing to believe Chase could not be his son, he can’t help but wonder. He loves being Violet’s father and catches himself thinking about what Chase would have been like at her age.

Finn stayed away all those years so he didn’t know him as a child, or a teenager, or as he grew into a young man. If he and Jackie hadn’t had that one night stand he wouldn’t be second-guessing himself and there wouldn’t be a question. Plus, he hurt his dad’s feelings, and seeing him play with Violet and how Greg acted around her, brought back memories to Finn of when he was a child. Finn may have felt he was done dirty when Jackie married his dad, but he’s done his dad dirty by cutting off contact all those years. Two wrongs don’t make a right!